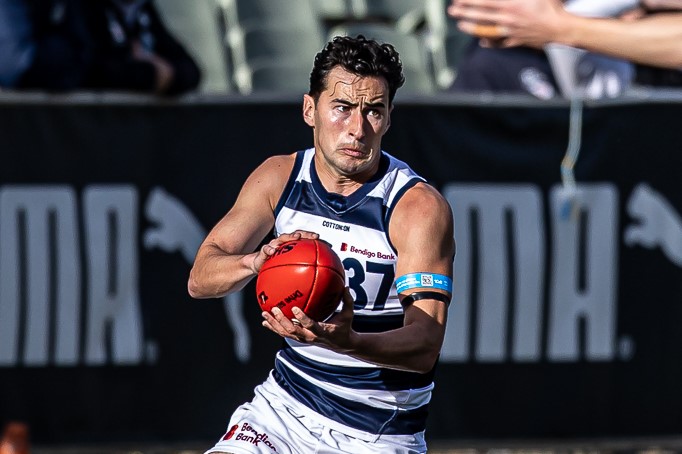 SAM Simpson has given rise to hope he could play a role in Geelong’s push towards AFL glory after successfully negotiating a hitout in the VFL on Saturday.

The 24-year-old made his first appearance at any level in 2022 after an almost five-month concussion battle.

“It was good to tick that box off,” he told geelongcats.com.au

“I really enjoyed it. I felt good out there.

However, Simpson will have to wait another fortnight to press his claims for an AFL berth with Geelong having a bye at VFL level.

“It’s probably not ideal with the bye then straight off,” he said.

“But, I’ll get some more kms in the legs and make sure I’m feeling really fresh for the end of the year.”

Geelong coach Shane O’Bree was impressed with Simpson’s return and his combination with uncapped youngster Nick Stevens, who finished with 36 disposals.

“They both played as high defenders, and they got a lot of the ball,” O’Bree told Geelong Broadcasters.

“They defended really well, they played to their strengths, and they really opened up the Carlton defence and gave us good looks going forward.

“I thought those two boys really stood out.”

The loss leaves Geelong three games and percentage outside the top eight with five rounds remaining.

However, with the bye next week, the Cats would need to win their last four matches and have other results go their way to snatch a finals berth.