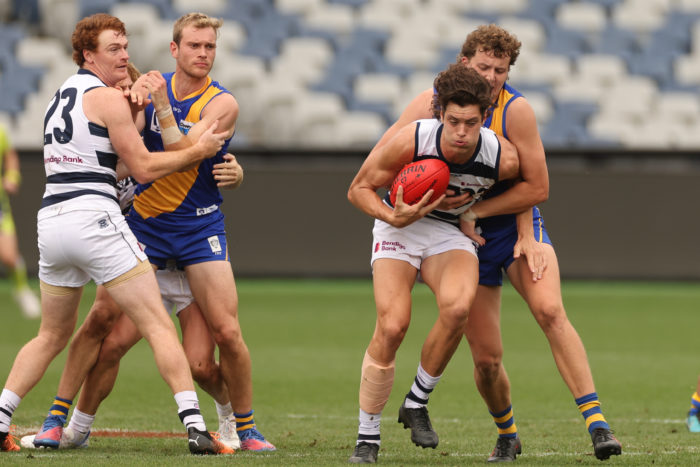 SHANNON Neale says Geelong fans shouldn’t read too much into his contract extension being only one year.

The 203cm key forward was among five Cats to extend their time with the club earlier this week, with some eyebrows raised at the talented Western Australian’s deal not being longer than until the end of 2023.
However, Neale, who turns 20 on Monday, is content in the Hoops.

“I’m happy to be here for as long as it lasts; I don’t look to go anywhere else,” he said. “I think for my development, this is the best place for me.

“Having the likes of Harry Taylor, Nigel Lappin, and Hawk (Tom Hawkins) and Jez (Jeremy Cameron) on-field, I think that’s the key to my success,

“As long as those guys are here, I’ll be here as well.”

Neale, who made his lone AFL appearance in Geelong’s Round 11 win over Adelaide, is making the most of Hawkins’ presence.

“I think the key to my improvement is doing that physical side and that contested work,” Neale said.

“So he brings that, and that’s one of his strengths.

“Whilst he’s here … I’ll just pick his brain, and, hopefully, it can translate into my game.”

Despite making just the one AFL appearance since arriving at Geelong at pick 33 in the 2020 National Draft, Neale is happy to bide his time behind the Hawkins-Cameron combination.

“I guess I got drafted as a developing prospect, so for me, it is continuing to develop,” he said.

“With two Coleman (Medal) leaders, it’s a bit hard. But that just says you’ve got learnings written all over it.

“You’ve got two of the best. I can soak that up, pick their brains, and hopefully translate into one of them down the track.

“But, for now, I’m just focused on being the best footballer I can be.

“I know that’s going to take time, so with them here, it certainly helps with that.”