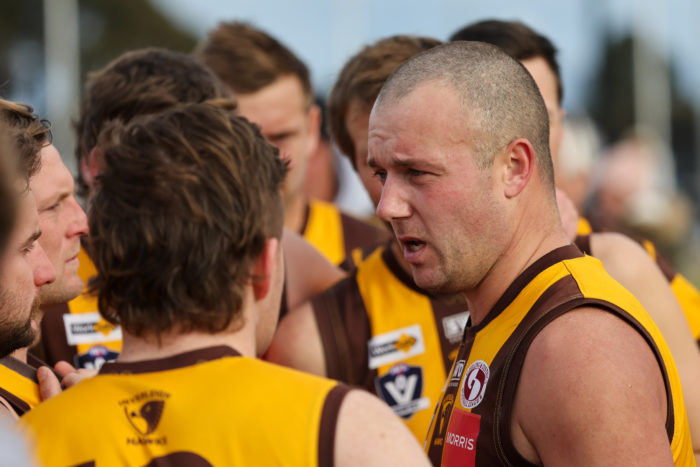 AFTER three consecutive wins by an average margin of 83 points, Inverleigh coach Adam Donohue is embracing the challenging trio of matches his team will face in the run to the finals.

The ladder-leading Hawks, who sit two games and percentage clear of the second-placed East Geelong, face Bell Post Hill and Thomson on either side of a meeting with the Eagles that will likely decide the minor premiership.

“It’s going to be a good lead-up to the finals,” Donohue said. “It starts with Bell Post Hill, who are coming off a really good win against East Geelong.

“You want to finish top, but you want to be kept on your toes a little bit.

“Hopefully, we built Bell Post, and East wins, and then it’s a really big game in Round 17.

“You want to play in big games and games that mean something than games that don’t mean anything.

Donohue says the next three weeks are also a chance to make some structural tweaks against quality opposition.

“It’s really important that we continue our form and keep working on things,” he said.

“Against better opposition, you are able to do that at a full intensity.”

Inverleigh is the owner of one of the shortest injury lists in the GDFL, with Kad McEwan-Walsh, Scott Condy, Jordan Drew, and captain Jack Fiolet unable to be considered this week.

McEwan-Walsh and Drew are season-ending issues, while Condy (knee) is a chance to take on East Geelong, while  Fiolet (knee) is likely to return for the Hawks’ first final.

The luckless Mick Grozdanovski (knee) will return via the reserves against the Panthers.

“The injuries he’s had, he hasn’t been able to get any cardio work in.

“He probably needs a run in the twos for a week.”