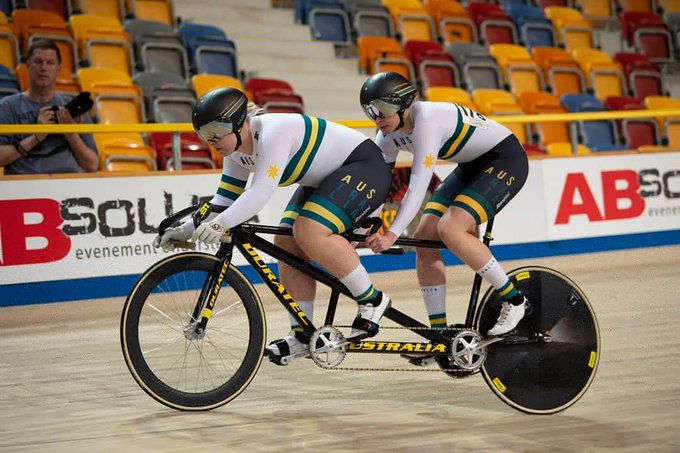 Gallagher represented Geelong and Victoria Country in basketball, following in her Mum’s footsteps, with both also playing netball.

Jess was diagnosed with cone dystrophy in year 12, the cause of the loss of her eyesight which classifies her now as leagally blind.

She became the first Australian female to win a medal at the Winter Paralympic Games taking bronze in the Women’s Slalom at the 2010 Vancouver Winter Paralympics –  on her birthday of all days!

Gallagher is no stranger to the velodrome, setting a world record and becoming world champion in 2016, also winning bronze in the 1km time trial, and at the 2016 Rio Paralympics she became the first Australian athlete to win a medal at both Summer and Winter games, after success in the 2010, 2012 and 2014 winter games

The duo was one of three triumphs in the velodrome with the men’s sprint team and women’s pursuit quartet also roaring to record-breaking wins.

There was a sense of frustration for the Australian flagship men’s pursuit foursome, who failed to make the final for the first time ever, the quartet taking home bronze beating Wales in the third place race.

“It’s been a tough couple of years but I knew I was capable and wanted to deliver some more medals for Australia.”

Australia also dominated in the pool, twice taking all three medals on offer in an event, helping team Green and Gold to a haul of eight gold, four silver and four bronze, catapulting Team Australia to the top of the tally.