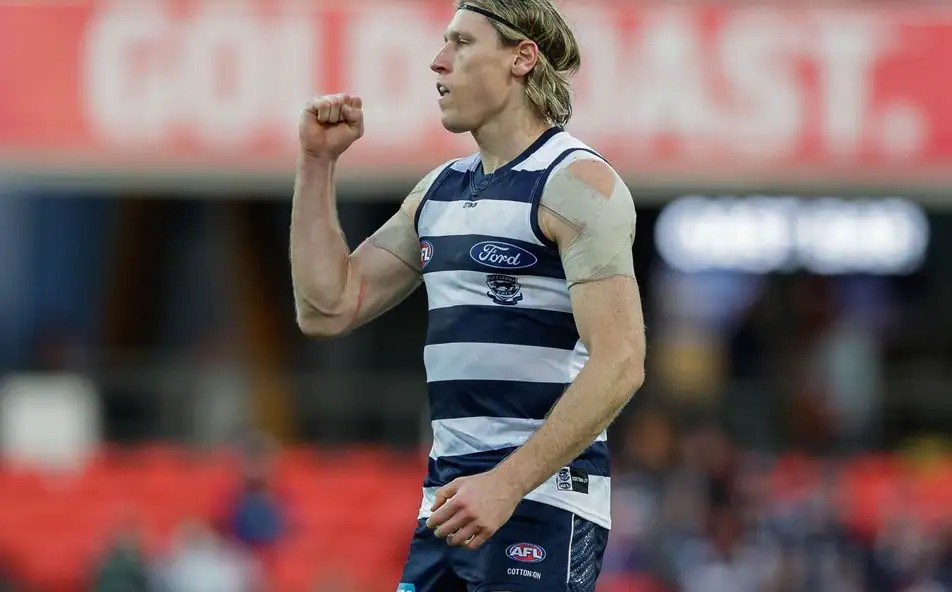 RELENTLESS Geelong has effectively secured the AFL’s minor premiership with a 60-point thrashing of Gold Coast at Metricon Stadium.

The win may have come at a cost, however with Rhys Stanley subbed out in the third quarter with an issue to his upper left leg.

Only Collingwood, which plays Sydney on Sunday, can join the Cats on 17 wins, but the Magpies are too far behind on percentage to realistically be any chance of toppling Chris Scott’s team from top spot.

And if the Cats beat struggling West Coast at GMHBA Stadium next weekend, it won’t matter what the Magpies do in their final two games.

With a favourite son of both clubs in Gary Ablett watching on after the dual Brownlow Medallist was awarded Suns’ life membership before the game, Geelong was simply too good for the hosts.

Tyson Stengle booted three goals to take his tally past 40 goals for the year, while Jeremy Cameron also kicked three majors to move within two of Carlton’s Ed Curnow in the Coleman Medal race.

Cameron’s tally could have been more as he kicked three behinds as well as his goals as he finished the game with 10 score involvements.

Cameron Guthrie was impressive for the Cats with 30 disposals and four clearances, while Patrick Dangerfield returned from a calf niggle with 24 touches, seven clearances and nine score involvements.

Izak Rankine, sporting a new peroxide hairdo, showed speculation over his future amid a contract offer from Adelaide isn’t affecting his on-field performance with two goals for the Suns.

The small forward’s night ended on a sour note, however, after he came off in the final quarter with a left shoulder injury following a tackle by Cats’ superstar Dangerfield.

Stengle’s smart finish from a Tom Hawkins tap led to the opening goal of the game before Dangerfield surged from the centre clearance and set up Cameron’s first.

Gold Coast gave away three goals with turnovers as they struggled to get out of their defensive 50, and Geelong racked up seven goals to be 31 points clear at the first change.

A further five majors in the second term continued the carnage, with Geelong extending their advantage by 20 at the main break.

The Suns came out firing with a three-goal burst at the start of the third quarter, but the Cats rallied with three of their own to hold a 55-point lead at the final turn.

Cameron spent the last 12 minutes on the bench as Geelong eased to their 17th win of the season.