“Ben’s our coach” Bombers CEO backs in Rutten for now 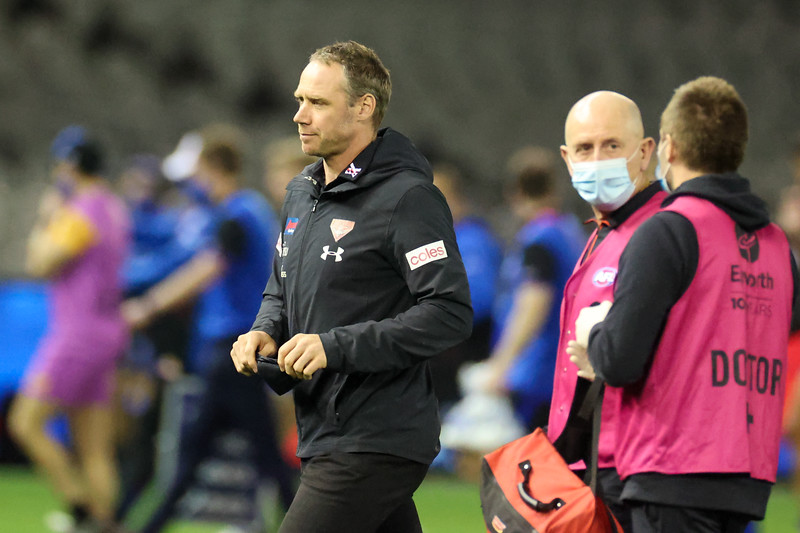 Despite the rumour mill going into overdrive around Windy Hill yesterday, Essendon’s CEO remains adamant Ben Rutten will coach the Bombers this weekend.

Ben Rutten has been moved on as coach of Essendon, per @3AWNeilMitchell

Mitchell later clarified his claims, stating he repeatedly said “unconfirmed” on air, a vital word Channel 7 failed to use in their tweet

“This tweet is not what I said. I stressed it was an UNCONFIRMED tip”

“I reckon I said unconfirmed at least five or six times.”

Bombers CEO Xavier Campbell tried to clear the air late Monday afternoon about rumours of Rutten’s sacking, and whether the club had approached Alistair Clarkson to coach in 2023

“Ben’s our coach of the footy club. As you guys are aware there’s ongoing discussions at a board level”

“There’s an ambition to drive improvement and make our football program the best program it can be, and that’s where we sit at the moment”

When quizzed if he had made contact with Premiership winning coach Alistair Clarkson, Campbell said

“I have not spoken to Alistair Clarkson, that’s all I’m going to say”

The club’s leading goalkicker also weighed in to the drama that unfolded yesterday, saying the best thing for the club would be to get Clarkson in the coaches box.

“Alistair is quite a confronting person, cause he’ll come in and just… there could be a tornado but that is what this club needs”

“I did say two months ago, ‘why aren’t Essendon in this race (to sign Clarkson)?’ “

Paul Brasher stepped down as club president on Monday morning, David Barham to take over his role.

It was the second consecutive disappointing loss for the Bombers, after losing to GWS by 27 points the week before – GWS one of only three teams below them on the ladder.

After the weekend’s defeat, Rutten said the “embarrassing” performance was not one Essendon could not tolerate.

“Certainly, it’s not a great result in terms of tonight’s performance, no question about that”

“It’s about us being really strong and really clear as a footy club and as a group of players about where we’re going and what we’re trying to build.”

“It’s never going to be smooth sailing, clean progression to becoming a great team, but performances like that, it’s not stuff that we can tolerate or accept, and we won’t.”