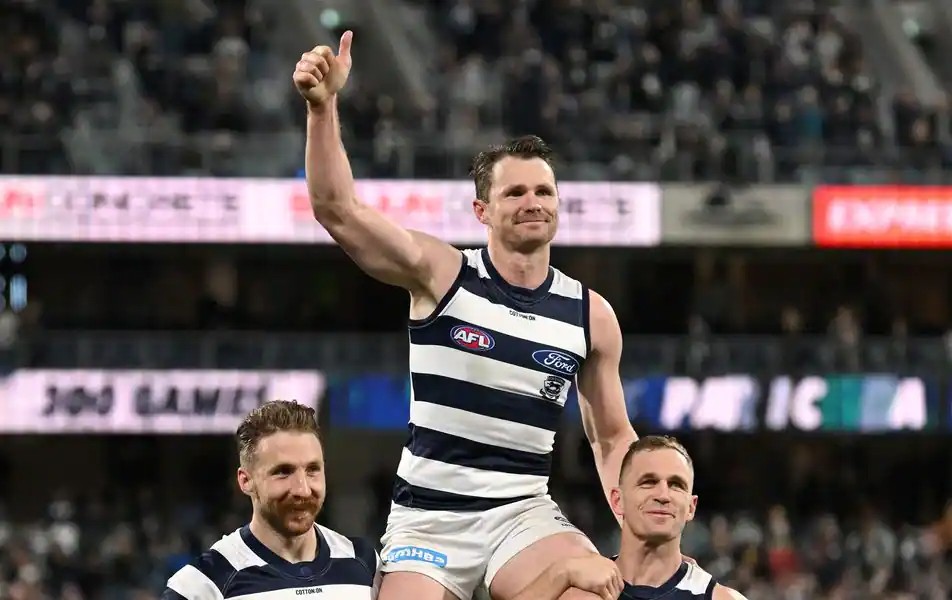 Having already secured the minor premiership, the Cats warmed up for the finals with a predictable belting of the lowly Eagles for their 13th-straight win.

Even when West Coast was challenging for premierships they endured beltings at GMHBA Stadium, and Saturday’s game was no different as a bottom-two team.

Tyson Stengle continued his push for All-Australian selection, booting a game-high four goals to take his season tally to 46 in his first year at Geelong.

Tom Hawkins entered the match with an opportunity to pinch the Coleman medal off Carlton’s Charlie Curnow, but he was held to four goals by star Eagles defender Tom Barrass.

But Cats defender Kolodjashnij will be in doubt to play in Geelong’s first qualifying final after entering concussion protocols.

Kolodjashnij suffered a head knock in the first quarter and was subbed out for Tom Atkins, meaning he will be sidelined for at least 12 days.

Guthrie injured his shoulder early in the second quarter and took no further part in the game, but the Cats said that was just as a precaution.

Geelong will have the week off before preparing for a qualifying final at the MCG against Fremantle, Sydney or Collingwood.

For the Eagles, a club-worst season comes to an end after going 2-20 to finish 17th on the ladder, only ahead of North Melbourne on percentage.

Jamie Cripps was their most influential player with three goals in his 200th game for the club.

Junior Rioli (abdominal) failed to play out the game for the Eagles and was subbed out for Greg Clark in the last quarter.