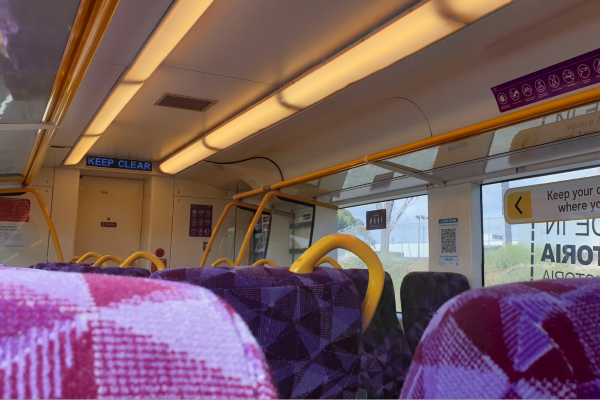 Victoria Police has arrested and charged a man they allege performed an explicit sexual act in front of a 29 year old woman on a Geelong V/Line train that was headed to Melbourne.

Police further allege the man performed another indecent act next to a 21 year old woman on a Hurstbridge line train, another incident involving a 31 year old victim on a tram in Melbourne’s CBD

The 20 year old man was arrested after investigations stemming from a report by a 22 year old woman travelling on a Ballarat V/Line service, the woman used the STOPIT service to notify police of a man performing an explicit sexual act next to her, a 16 year old girl was subjected to similar behaviour on a train heading in the opposite direction the same day.

Detectives from Victoria Police’s Transit Crime Investigation Unit executed a search warrant on Friday, arresting a man and charging him with five counts of sexual activity directed at a person

Transit Crime Investigation Unit Detective Senior Sergeant Rob Milliken said the service isn’t monitored live, but anyone subjected to such behaviour can text ‘STOPIT’ to 0499 455 455 and fill out a form which is sent directly to a specialist team of transit police.

“STOPIT is about calling out unwanted sexual behaviour for what it is – completely unacceptable.”

“Every piece of information helps us make the public transport network safer.”

“If you see something, please say something.”

“The STOPIT service, which launched on trains in July and expanded to trams and buses last month, is the first of its kind in Australia.”

“It aims to combat unwanted sexual behaviour on public transport.”