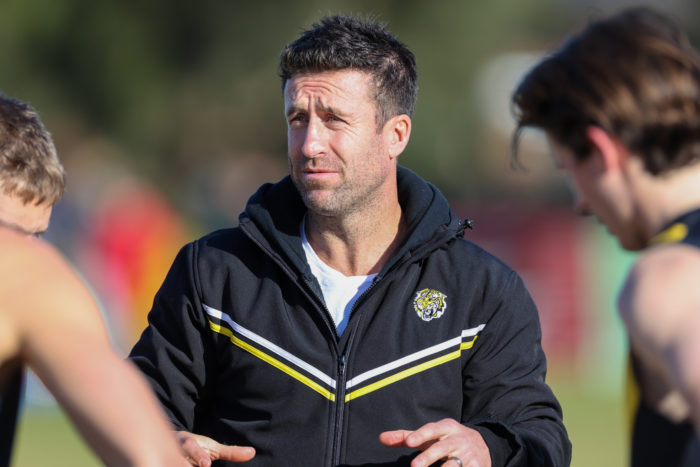 DOM Gleeson is preparing to deliver the toughest news of his Torquay coaching tenure, with Ben Raidme set to return for today’s BFNL grand final against Barwon Heads.

Gleeson has declared the veteran captain will play after missing the second semi-final win over the Seagulls with a minor hamstring issue.

“He’s ready to go,” Gleeson said. “We’re excited to get him back in.

“He’s a huge inclusion for us, and I know he’s pumped he got his body right.”

It’s the only change the Tigers will make, which means one member of that victorious second semi-final 22 will be getting a tap on the shoulder from Gleeson.

He says it’s been on the coaching staff’s minds since Barwon Heads overcame Drysdale in the preliminary final.

“Driving away from the game with assistant coach Aaron Nesbitt, we said, ‘let’s just give it a day (to consider).’

“It’s always going to be a hard decision. Both he and I have been on the wrong end of those decisions in our playing careers as well.

“We’re no stranger to it; we think every team that makes a grand final, there’s always going to be a tough one (decision).

“I’m sure Barwon Heads are going through the same issue.”

Gleeson said the decision is not as simple as dropping the 22nd-best player.

“It’s balance that’s going to come into the discussion,” he said,

“It’s going to be a tough one. As a coach, you dread it. But, you also wish for it because it highlights the list, and how strong it is and how fit you are.”