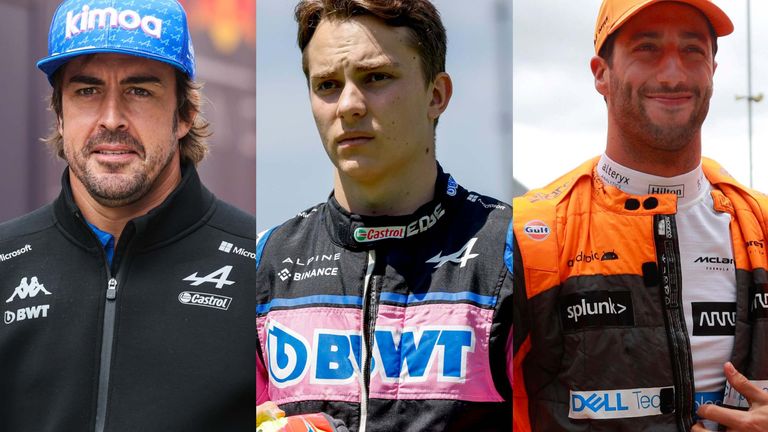 McLaren’s new Australian signing Oscar Piastri has opened up on how upset he was to be falsely announced as a driver for Alpine amid the legal wrangle between the two teams.

And the 21-year-old has acknowledged it was “unfortunate” that the driver he’s replaced at McLaren should happen to be one of his heroes, fellow Australian Daniel Ricciardo.

Piastri said he had been in the simulator when Sfaznauer told him he was going to be announced as an Alpine driver from the 2023 season.

According to Sfaznauer, Piastri just “smiled and was thankful.”

But Piastri told F1: “That was a bizarre and frankly upsetting episode.

“It was done publicly in front of some members of the team who were oblivious to the situation (regarding his contract talks with McLaren) and I didn’t want to cause a scene in front of them.

“Once we were in private, I told Otmar what our position was and what he had been told multiple times before that.

“To have that falsely announced was something my management and I felt we had to correct and there was also potential legal implications if we didn’t deny the announcement,” added Piastri, who subsequently announced on social media he wouldn’t be driving for Alpine.

Piastri said there had been a lack of clarity from Alpine and a ‘breakdown in trust’ with the French team, which prompted his decision to leave the team which was employing him as a reserve driver.

He felt his future was uncertain as the team were discussing a contract extension with double world champion Fernando Alonso, who subsequently announced his departure for Aston Martin at the end of the season.

Piastri, though, had already signed for McLaren by then.

“The lack of clarity around my future, and ultimately a breakdown in trust, I felt the very attractive offer of McLaren and the positive dealings with them thus far were all reasons why I felt McLaren was where I was best off,” said Piastri.

“My decision was made well in advance (of Alonso’s departure), which made Alpine’s announcement probably even more confusing and upsetting because we had told the team that I wasn’t going to continue.

“It was quite upsetting as the announcement was false and it also denied me the opportunity to properly say goodbye to everyone at Enstone (Alpine’s UK base).”

But Piastri had sympathy for Ricciardo, whose future in F1 is uncertain.

“As a fellow Australian, it’s unfortunate that of all people on the grid, it’s Daniel who I will be replacing,” he said.

“Daniel is someone who I have watched as a fan for over 10 years, since I started racing effectively.

“I have immense respect for Daniel. His achievements in the sport – his race wins and podiums – but also his personality he brings to the sport, I think he’s a fantastic personality for the sport.

“I wish him all the best for whatever his future holds. That being said, I don’t get to choose which driver I replace.”

“I can’t not take an opportunity because the previous driver in that seat was Daniel.

“McLaren were extremely keen to have me onboard and it was an opportunity that was too good to refuse.”

Image: Fernando Alonso (right) will shift from Alpine to Aston Martin next year, opening up a seat. Current Alpine reserve driver Oscar Piastri (centre) has now signed with McLaren, leading to  fellow Aussie Daniel Ricciardo (right) losing his seat despite having a year left on his contract.