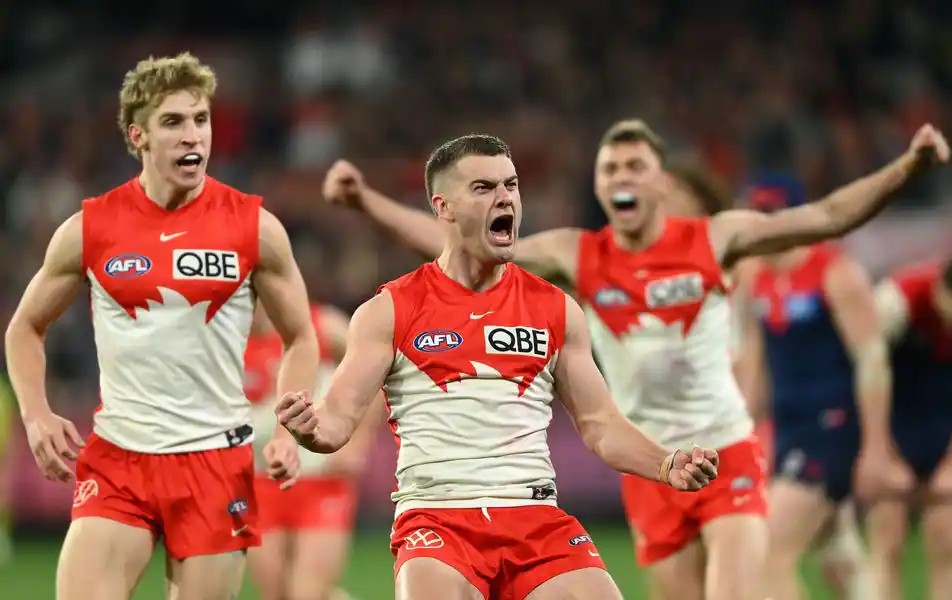 SYDNEY has surged through to its first AFL preliminary final since 2016 after shocking reigning premiers Melbourne by 22 points.

In the first final at the MCG since the 2019 decider, the Swans ruined Melbourne’s coming home party with some scintillating run-and-gun football to dismantle the Demons’ much-vaunted defence.

Melbourne entered the qualifying final as hot favourites after humiliating the Brisbane Lions in the final round of the home-and-away season but the Swans completely outclassed the Demons after halftime in front of 78,377 fans.

The Demons, who are looking to back up last year’s drought-breaking grand final win in Perth with a flag back in Victoria, will now host Brisbane in a sudden-death semi-final at the MCG after the Lions eliminated Richmond.

In a moment of madness, Harmes crashed into Lloyd, giving away a 50-metre penalty to allow the Swans to kick the first goal of the final term and build an 18-point lead.

Melbourne fluffed several opportunities to get back into the contest before the Swans took the ball up the other end and Isaac Heeney all but sealed a famous victory for Sydney midway through the last quarter.

Making the win all the more impressive for the Swans was Lance Franklin had virtually no impact as All-Australian defender Steven May held the star veteran scoreless.

Franklin and May tussled all night, with the pair giving away free kicks against each other, but the Demons star easily earned the points with 15 intercepts.

After a tight first half, the Swans opened the game up by slamming through six third-quarter goals to grab a 12-point lead at the final change.

It was an even performance from Sydney, with Lloyd, James Rowbottom and co- captain Luke Parker the leading possession winners and Tom Papley, Tom Hickey and Sam Reid all playing crucial roles.

Melbourne star Christian Petracca played through the pain of a calf issue after crashing into Franklin in the first quarter.

The Norm Smith medallist was clearly troubled with strapping on his right calf but seemed to improve the longer the game went on.

Forward Bayley Fritsch also looked to be in doubt after being in deep conversation with Demons medical staff only minutes before the game, but fired with a game-high three goals to be among Melbourne’s best.