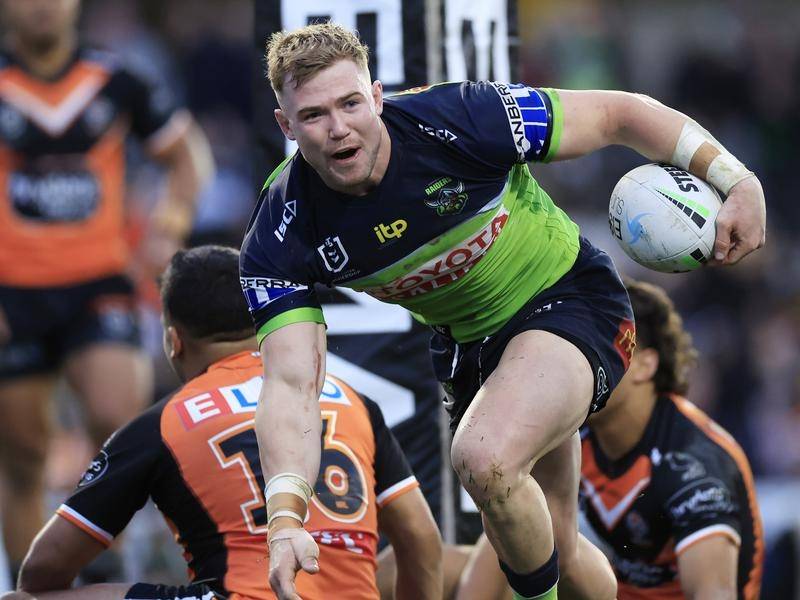 Parramatta second-rower Isaiah Papali’i has praised the late-season resurgence of Canberra’s Hudson Young ahead of their match up in Friday night’s NRL semi- final.

The clash looms as an exciting one: Papali’i has continued his 2021 Dally M Team Of The Year form this season, while Young has surged into World Cup calculations after starring in the Raiders’ push to the finals.

Young has scored the second-most tries of any second-rower this season, notching at least one in each of the Raiders’ last six wins.

The 24-year-old spent time in reserve grade side this year and last season but has cemented a spot in the Raiders’ top flight lately thanks to his ball-playing ability and knack for breaking the line.

“He’s just a skilful type of player. You see him kicking the ball, throwing long passes.

“I’m excited to go up against him.”

The Eels bring their own strike weapon to the left second-rower spot, with Shaun Lane registering the most try assists of any second-rower in the competition.

“They’re both having awesome years,” Papali’i said of Lane and Young.

“They’re both constant threats with the ball in hard.”

“(Lane) is so big and hard to handle. I think what works for him is that running hard mentality and then you get the little offloads and line breaks that come off that.”

The Eels lost to Penrith in their qualifying final and come into their semi- final at CommBank Stadium facing the possibility of being eliminated in the second week of the finals for a fourth consecutive season.

But Papali’i said finishing the regular season in the top four and earning the double chance had given the Eels a different outlook on this year’s finals series.

“Last year we had to go from win-to-win-to-win if we wanted to get to that final stage,” he said.

“But this year we get to learn from what went wrong for us last week and take it into this week,” he said.

“I don’t feel the pressure as much as I did last year.”

For the first time in the last four years, the Eels entered the finals series having won three consecutive games, which Papali’i said gave him reason to be positive.

“The way we’ve been performing at the back end of the year, I have a lot of belief in myself and have that trust from BA (Eels coach Brad Arthur) and the players in general,” he said.

“I back myself to be up for these big games.”