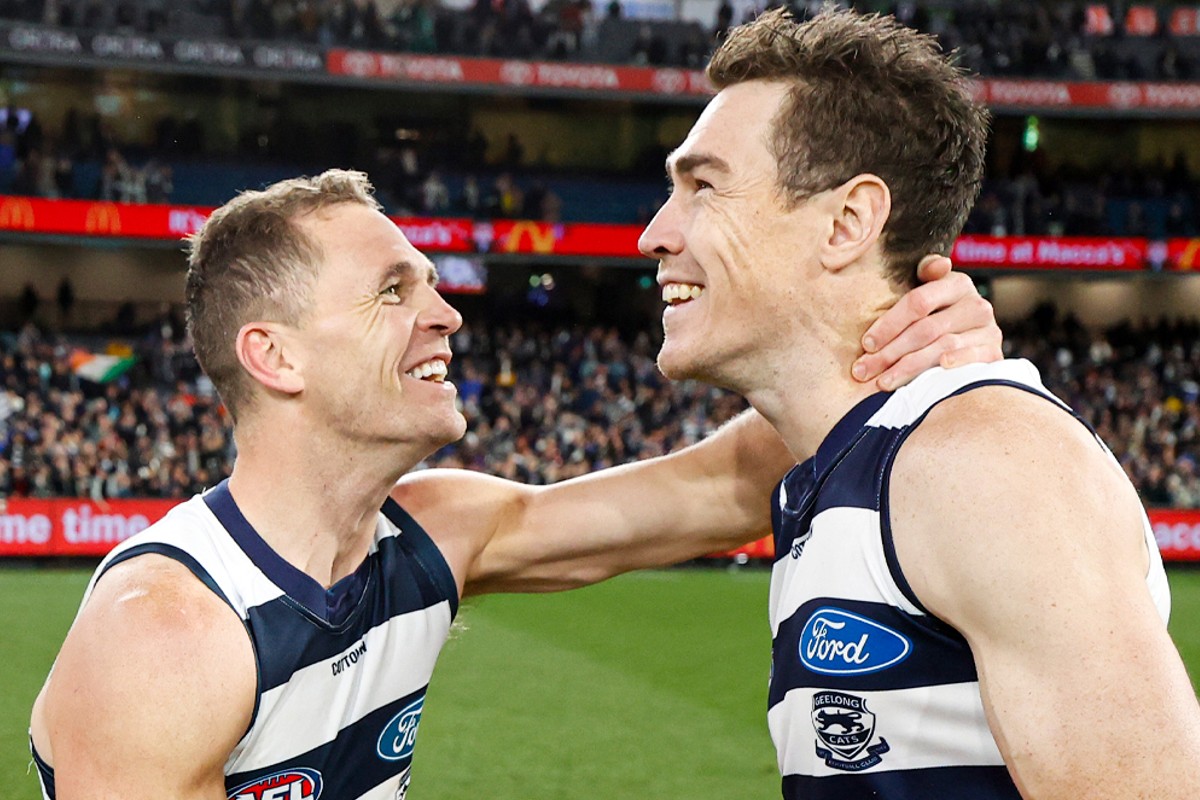 GEELONG is one win away from an elusive AFL premiership after banishing its preliminary final demons with a 71-point thumping of the Brisbane Lions at the MCG.

Lifted by a heroic performance from star veteran Patrick Dangerfield, the Cats booked their second grand final appearance in three seasons by winning 18.12 (120) to 7.7 (49) in front of 77,677 fans.

Geelong will enter the September 24 decider on a 15-game winning streak and are guaranteed to start the game as warm favourites no matter if the Sydney Swans or Collingwood win the other preliminary final.

It was the Cats’ sixth preliminary final since 2013, but they have not won a flag since 2011 and their only grand final appearance in that period was a loss to Richmond in 2020.

But young speedster Max Holmes looks set to miss the decider after being subbed out with a suspected hamstring injury in the third quarter.

The 20-year-old looked heartbroken on the bench, punching the ground, as Irishman Mark O’Connor was substituted into the match.

Dangerfield set the tone for Geelong, booting the first goal of Friday night’s match on his way to a first-quarter tally of nine touches and two majors.

The Brownlow medallist finished with 28 possessions, approaching the match with a steely determination to win the premiership that has eluded him in 302 games with Adelaide and the Cats.

“We feel like we have been building and it is not just one player, it has been such a strength of ours all year, if one is down, the next stands up and that is been our mantra,” Dangerfield told the Seven Network.

“It is a credit to our coaching staff, they have been so balanced and not just with the wins, even when we have not played our best.”

The Cats fielded the oldest team in VFL/AFL history with an average age of 28 years, 173 days, including 10 players aged more than 30, but it was not just their established veterans who stepped up.

Neale was restricted to just one touch in the second quarter as Geelong built a match-winning lead, skipping away to a 30-point lead at halftime.

Any hope the Lions had of repeating their second-half heroics from the semi- final win against Melbourne were ruined at the start of the third term when Joe Daniher kicked a set-shot out on the full, before Tyson Stengle snapped an opportunistic goal a minute later for Geelong.

In a blow for the Lions, former No.1 draft pick Cam Rayner was helped off the field with a suspected foot injury and was subbed off for Rhys Mathieson.

Rayner missed the entire 2021 season after rupturing his ACL and had taken time to recapture his best form this year.