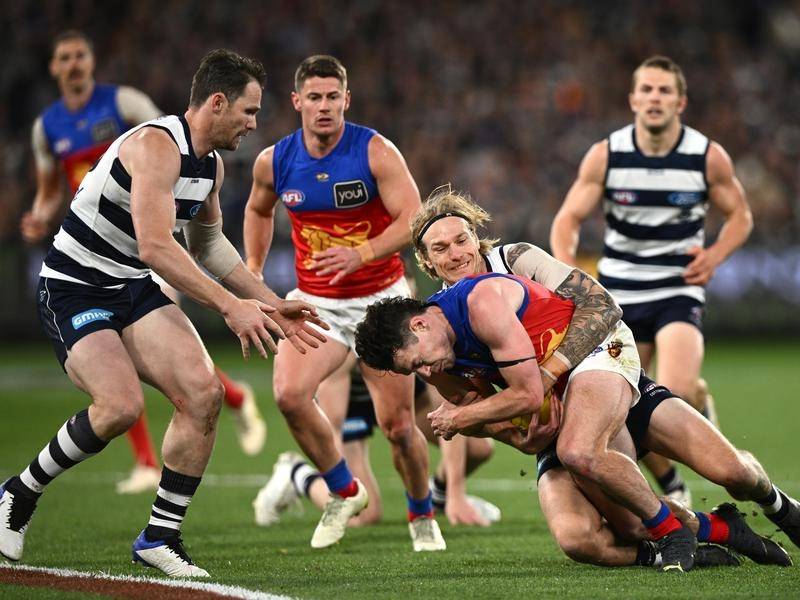 When Chris Scott was asked whether he would send a tagger to Lachie Neale in their AFL preliminary final, the Geelong coach warned the Cats would be playing “Russian roulette” if they didn’t limit the Brisbane star.

Those comments could easily be taken to mean Geelong would get one man to clamp right down on Neale in Friday night’s clash at the MCG.

But it turns out there’s more than one way to jam a gun – or stop the 2020 Brownlow Medallist.

Geelong assistant James Kelly told SEN Radio pre-match the Cats would take a team approach to Neale, rather than sending one player to the star Lion.

Guthrie went to Neale at the first bounce but the Lion burst away for the opening two clearances – although neither proved particularly effective.

Cats skipper Selwood came off the bench and, in his first action of the game, made a point of going to Neale and roughing him up.

Atkins also came off the bench and turned his attentions to the star Lion.

“It seems like it’s Selwood at times, Atkins at times and Guthrie occasionally.”

Neale had a credible three clearances and seven touches at quarter-time, and was involved in the build-up to one goal, but had just 13 metres gained.

They held Neale to a single disposal, while at one point, he received stern words from coach Chris Fagan on the bench.

Meanwhile, Geelong kicked out to a 30-point halftime lead.

Neale lifted for six touches in the third and fourth quarters but by then, it proved too little, too late.

Come the final siren, none of Selwood (12 disposals), Atkins (11) nor Guthrie (21) had big numbers themselves, but their job was done.