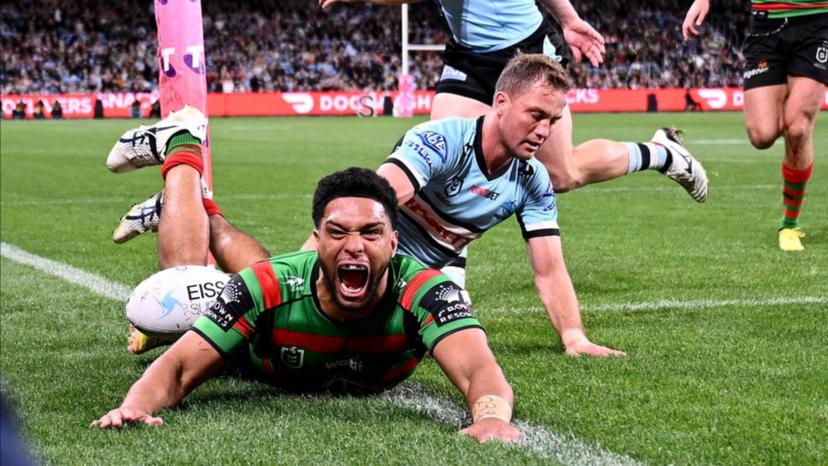 South Sydney have set up a grand final rematch with Penrith to decide who returns to the NRL decider after easily dispatching Cronulla 38-12 at Allianz Stadium.

On a dominant night for the Rabbitohs, Cameron Murray was brilliant in the do- or-die semi-final while Lachlan Ilias also stood up and Taane Milne scored two tries.

But it didn’t come without some concerns for South Sydney, with Alex Johnston suffering a hip flexor injury, Siliva Havili a calf problem and Jai Arrow a groin issue.

With a seven-day turnaround into next Saturday’s clash with Penrith at Accor Stadium, the Rabbitohs would be hopeful of having some of the trio fit enough to play.

But regardless, little was going to sour the Bunnies’ night as they qualified for a fifth straight preliminary final.

They jumped out to an 18-0 at halftime and while Cronulla got themselves back into the game at 18-6 and 24-12, the Rabbitohs never looked in trouble.

Souths also did it without relying on Latrell Mitchell for an impact play.

Mitchell kicked seven goals from as many attempts but he also threw an intercept pass that led to a Sharks try.

Cody Walker also had a quiet evening, albeit while skipping over for the try that put the match to bed at 30-12 before Milne crossed late.

Instead, this time it all started with their inspirational skipper Murray.

The lock has been one of the unsung heroes of South Sydney’s surge to the finals, routinely playing a part in tries for his outside men by digging into the line.

He was at it again for Souths’ second try, helping Ilias and Keaon Koloamatangi give Mitchell the space to put Taane Milne over.

Murray also provided the decisive play of the match just before halftime, breaking free from Dale Finucane’s hold to go over from 15 metres out.

Ilias also thrived in the key moments in the biggest game of the rookie halfback’s career.

He pulled off a crucial tackle on Braden Hamlin-Uele to drag down the Sharks prop when the score was 6-0, before later forcing an error on Wade Graham.

And when Cronulla opened the scoring in the second half, the No.7 went short side and backed up to score and re-establish an 18-point lead.

But for all the Rabbitohs’ brilliance, Cronulla were poor in defence.

Souths’ first try came when Mark Nicholls crashed through Toby Rudolf from close range, after Damien Cook put him one-on-one with the defender.

And while the Sharks briefly threatened a comeback in the second half, any hope of that was snuffed out when Walker scored with 17 minutes to play.

With that, Cronulla’s season was over, becoming the first top-two side to go out in straight sets since Manly in 2014.

Image: South Sydney have advanced to an NRL preliminary final after a 38-12 win over Cronulla. (Dan Himbrechts/AAP PHOTOS)