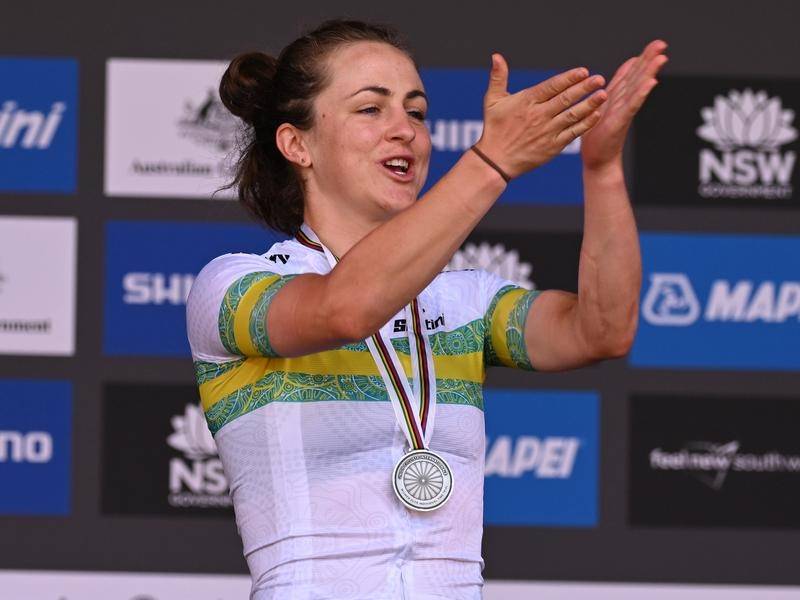 In the men’s elite event, unheralded Norwegian Tobias Foss had a huge upset win against a star-studded field.

Brown, 30, set the early best time and spent well over an hour in the hot seat after finishing before van Dijk, the last starter, claimed her third world championship in the discipline after first winning in 2013.

“My goal was to get on the podium and my dream was to win,” Brown said. “I can still aim towards that dream.

“It would have been amazing to win it on home soil, but it was still a really special day. I’m satisfied.

“It was a rollercoaster of emotions up there (on the hot seat).”

Van Dijk felt the city circuit, with its many corners, did not suit her, while she also had a back problem a few days before the event.

“I kind of said goodbye to my (world championship) jersey yesterday and put it at the bottom of my bag,” she said.

“This one, I’m still processing it, it’s a bit more of a surprise.

“It’s really a confirmation that I was best again – it feels great.”

Brown is one of Australia’s top medal hopes at the worlds and she now aims for the road race next Saturday, where the hosts will have a powerful team.

“It’s made me hungry, to be so close to the rainbow jersey,” she said.

Despite her fourth place at last year’s Olympics and her Birmingham Commonwealth Games gold medal, Brown surprisingly was among the first starters in the field of 45, which then meant a long wait in the hot seat.

Early confirmation of how well she rode came when another Dutch star, Olympic time trial champion Annemiek van Vleuten, was well off her pace and eventually finished seventh – one ahead of Australian Georgia Baker..

“It started this feeling of hope that I was maybe on an absolute flyer,” Brown, 30, said.

“I’m really happy with my ride, I felt I did my best.”

No-one could touch her until van Dijk and Reusser, the last two starters.

It is Australia’s second silver medal in the women’s time trial at the world championships, following Anna Wilson in 1999.

Compatriot Luke Plapp set the early pace on Sunday afternoon in the men’s 34.2km event, but he quickly dropped out of medal contention and was 12th.

Foss clocked 40:02.95 to beat Swiss Stefan Kung by 2.95 seconds, with two-time defending champion Filippa Ganna from Italy well off the pace in seventh.

Australian Rohan Dennis, a two-time world champion, is not racing at Wollongong as it clashes with his brother’s wedding.

Australia previously hosted the road worlds at Geelong in 2010.

Grace Brown has won silver in the time trial at the world road cycling championships in Wollongong. (Dean Lewins/AAP PHOTOS)