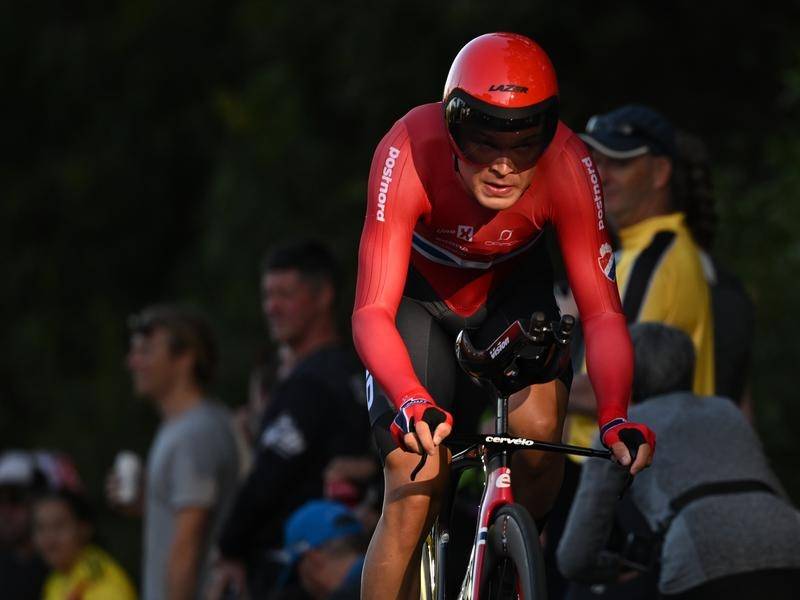 Tobias Foss repeatedly shook his head in disbelief after completing an almighty upset on day one of the world road cycling championships.

The Norwegian upstaged a star-studded field to take out the men’s individual time trial at Wollongong, easily the biggest win of his professional career.

Foss, 25, clocked 40 minutes 2.78 seconds over the technical 34.2km course to take the lead and then had several anxious minutes in the hot seat.

The gold medal was supposed to come down to Italy’s two-time defending world champion Filippo Ganna and young gun Remo Evenepoel, who last week became the first Belgian in 44 years to win a Grand Tour when he took out the Vuelta a Espana.

But Evenepoel had to settle for bronze, 9.16 seconds off the pace, while Swiss Stefan Kung took second at 2.95.

Ganna could only manage seventh, a whopping 55.32 seconds behind Foss.

British rider Ethan Hayter held the lead at the first checkpoint, but he had to swap bikes when he dropped his chain.

But he showed his potential by taking out the 2019 Tour de l’Avenir, regarded as a strong indicator of rising stars.

Australian Luke Plapp was the early leader, but he quickly dropped out of contention and finished 12th.

Compatriot Rohan Dennis, a two-time world champion, is not racing at Wollongong as it clashes with his brother’s wedding.