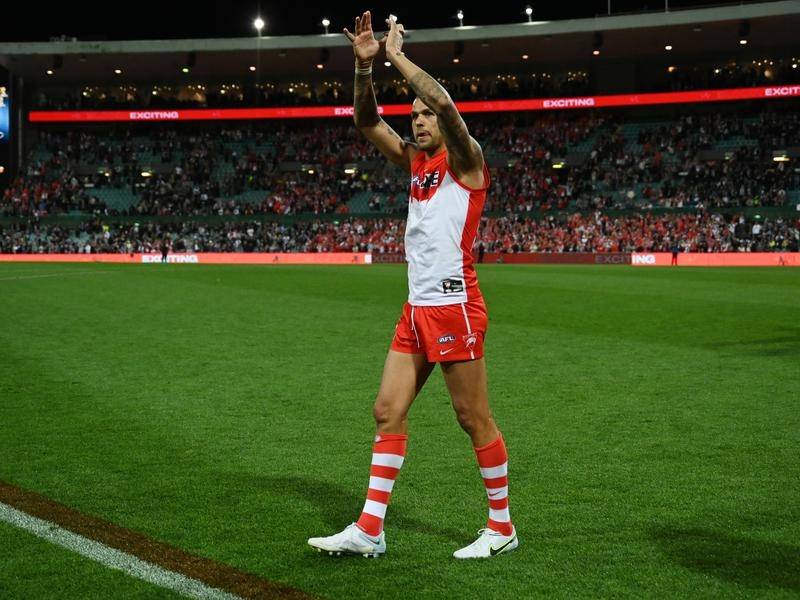 Just as Michael Jordan famously said “I’m back”, so Lance Franklin has announced “one more”.

Buddy, like MJ, is so big in his sport that nothing more needed to be said.

Franklin and Sydney cheekily copied the format of Jordan’s 1995 NBA comeback when they released a statement on Monday night, confirming the Swans star would play on in 2023.

The tweeted two-word announcement closely followed the layout of the fax 27 years ago that heralded Jordan’s return to basketball.

Franklin’s landmark nine-year deal ends after the Swans play Geelong on Saturday in the grand final at the MCG.

The star forward, who reached 1000 goals in round two against Geelong, had put contract talks with the Swans on hold amid speculation he could go to Brisbane.

The confirmation of Franklin’s deal is a massive boost for the Swans ahead of the grand final, where they will start as underdogs.

He has played 340 games and kicked 1047 goals, putting Franklin fifth on the AFL all-time list.

Franklin played 182 games for Hawthorn between 2005-13 before he shocked the game with his Swans deal, worth $10 million.

This will be his sixth grand final, with the first two resulting in Hawthorn premierships.

Franklin has played in three losing grand finals at the Swans.

But that is about the only prize missing from his 158 games with Sydney.

Franklin has well and truly delivered on his bumper deal with the Swans, winning the club’s goal-kicking award six times along with two Coleman Medals and four All-Australian selections.

He has been picked as an All-Australian eight times and is a certain AFL Hall Of Fame legend after retirement.

Franklin was made All-Australian captain in 2018 and was asked what he would tell the ceremonial team if it was about to play a game.

His response of “kick it to me” was pure Buddy, one of the game’s most charismatic and exciting players.

After a quiet qualifying final against Sydney, Franklin could hardly have been more impressive in their thrilling one-point win against Collingwood in Saturday’s preliminary final, kicking two goals to go with 13 disposals and seven marks.

Franklin will make a rare media appearance on Tuesday morning at training in the wake of the two-word confirmation that he will keep playing beyond Saturday’s premiership decider.

Lance Franklin and Sydney have more to celebrate after they confirmed he will keep playing in 2023. (Dean Lewins/AAP PHOTOS)