Dockers down Eagles in AFLW thriller 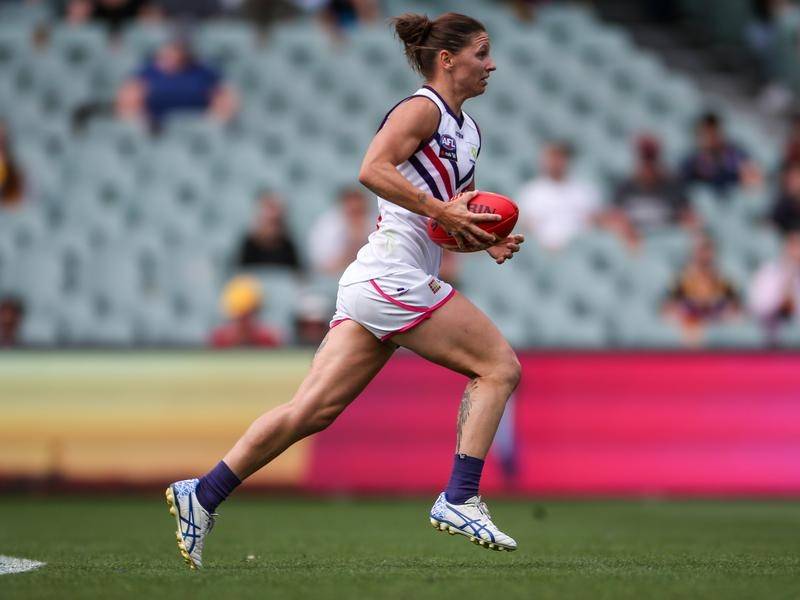 A Kiara Bowers tackling masterclass and a star display from Hayley Miller has helped Fremantle maintain their perfect western derby record with a three-point AFLW win over West Coast.

Bowers tallied 18 tackles to go with 17 disposals in Thursday’s match at Optus Stadium, while Miller was awarded the derby medal for her 26-disposal, eight- clearance display in the 3.8 (26) to 3.5 (23) win.

A goal to rising Eagles star Isabella Lewis closed the margin to just one point with four minutes to go, but Fremantle held firm at the death to improve their derby record to 5-0 and also notch their first victory of the season.

Lewis finished with a team-high 25 disposals for West Coast, while captain Emma Swanson collected 20 disposals and had five clearances.

Fremantle won the tackle count 87-47, with Bowers now boasting a league-record 10 matches in which she has tallied 15 tackles or more.

West Coast dominated the territory battle in the opening half, spending 65 per cent of game time in their forward half to win the inside 50m count 20-11.

Fremantle’s efficiency when they did go forward ensured they stayed within striking distance.

A clever snap from Amy Franklin got the Dockers on the board in the first quarter and Aine Tighe shot Fremanle into the lead when she nailed a 40m goal on the run in the second.

Tighe scored the only goal of the third quarter after being awarded a juggling mark that she actually ended up dropping.

Nevertheless, her 40m set shot gave the Dockers a five-point lead at the final change and Fremantle’s four behinds in the final term proved enough to get them the win.

Kiara Bowers put in another tackling masterclass for Fremantle in a three-point win over West Coast. (Matt Turner/AAP PHOTOS)