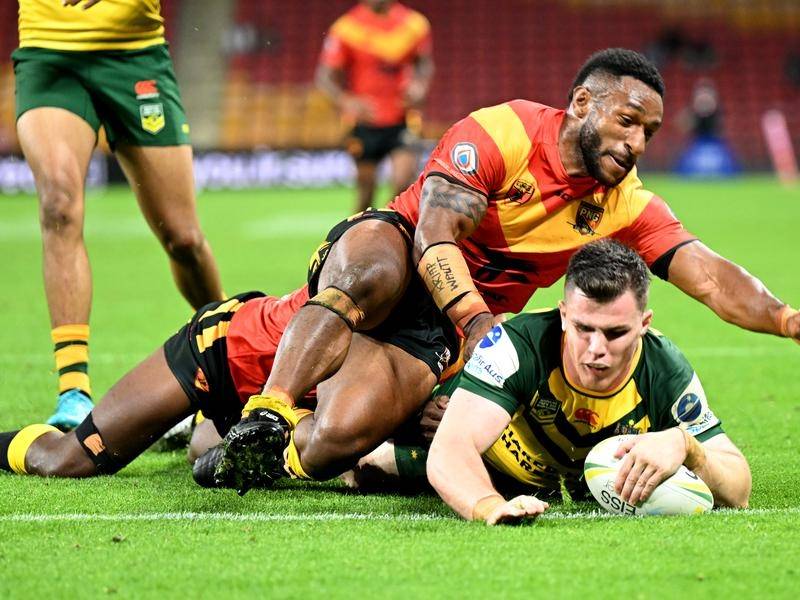 Daly Cherry-Evans made a statement about how much he wants to wear the number seven jersey at the World Cup by making his Australian Prime Minister’s XIII hit-out count with a masterclass opening.

The 33-year-old, captaining the Australian representative team, had a hand in three of the opening four tries in a 64-14 win over a gallant Papua New Guinea at Suncorp Stadium.

The Kumuls outfit was made up of 19 players from the Queensland Cup and one, winger Leon Undupia, from the Digicel Cup in PNG.

The Australians led 30-0 after 24 minutes but took their foot off the pedal.

Kangaroos coach Mal Meninga would have been pleased with the displays of key men who he will need to fire at the Rugby League World Cup in England next month.

Cherry-Evans had spoken before the game about how he was not giving up his Kangaroos number seven jersey to Penrith playmaker Nathan Cleary without a fight.

He laid on a try for Nat Butcher with a superb pass, then lobbed an inch-perfect bomb and crafty behind-the-line grubber to set up tries for back-rower Angus Crichton and centre Zac Lomax to launch Australia to a 24-0 lead.

Prop Tino Fa’asuamaleaui was destructive through the middle, as he was all year for the Gold Coast Titans. Hooker Ben Hunt also had touches of class to make his claim for the hotly contested number nine jersey at the World Cup.

PM’s XIII tyro Selwyn Cobbo played centre rather than his usual wing position for the Brisbane Broncos and had an outstanding match in a two-try display.

He handled the positional switch with class and looked a real danger inside winger Josh Addo-Carr, who scored a try and will almost certainly play in his first World Cup.

PNG fullback Edene Gebbie, once signed to South Sydney, was a constant threat for the visitors and scored a nice try on the cusp of half-time to cut Australia’s lead to 38-4 at the break.

The Kumuls dominated the early stages of the second half physically and on the scoreboard, with two early tries as the Kangaroos clocked off.

Meninga sent Cherry-Evans, hooker Ben Hunt and Fa’asuamaleaui back out to provide guidance and leadership and they delivered.

PM’s XIII winger Jojo Fifita was one of the best on field, completing a promising season in which he debuted in the NRL for the Titans.

Beau Fermor was among the contributors in the PM’s XIII’s comfortable victory over Papua New Guinea. (Darren England/AAP PHOTOS)