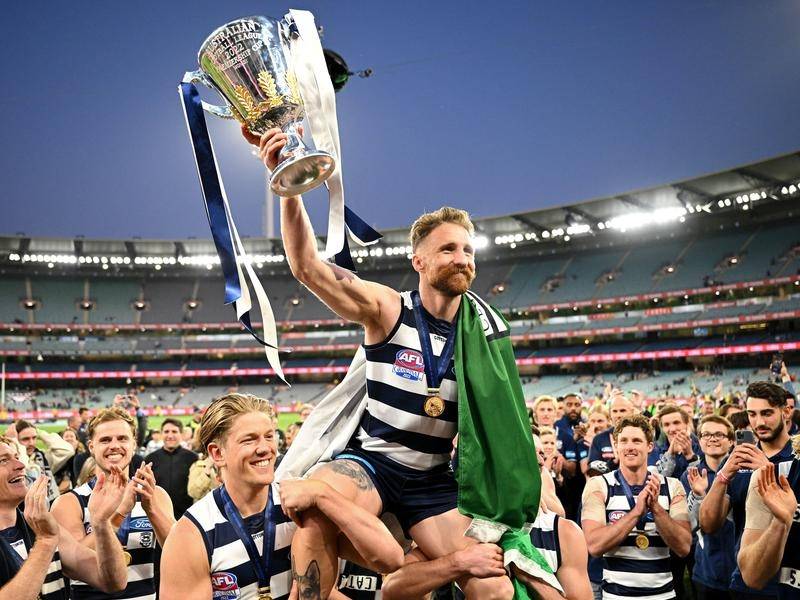 Zach Tuohy battled serious homesickness early in his AFL career but the Irishman believes the sacrifices have been worth it.

Tuohy, who arrived at Geelong ahead of the 2017 season following 120 appearances with Carlton, enthusiastically celebrated the breakthrough triumph.

The 32-year-old paid tribute to his Irish heritage after the Cats’ 81-point smashing of the Swans, draping the green and white flag of his old Gaelic football club Portlaoise around himself during the lap of honour.

Tuohy, who made his AFL debut in 2011, was then chaired off the MCG by O’Connor and Cats ruckman Rhys Stanley to recognise his 250th AFL game.

“I’m not done yet but it feels a bit full circle, like this is kind of what it all led to,” Tuohy told AAP

“The early homesickness and the tough days, it’s kind of all been worthwhile.

“You open yourself to criticism when you constantly just go for it and don’t bottom out.

“To give the club this, it takes balls to do what they’ve done and they deserve it.”

More than seven years separates the pair in age, but Tuohy and O’Connor have created a close bond that will only strengthen after becoming Ireland’s second and third AFL premiership players.

“We’re a particularly patriotic bunch (as Irishmen) so to win one is special, but to win one with Mark is something I’ll cherish more than anything else,” Tuohy said.

“He’s been a mega professional from the first day he got here, so for him to get the reward this early in his career, I hope he goes on and wins two or three.

“A brilliant teammate, incredibly selfless, and a cracking fella off field.

“It’s amazing how often you have those type of values that you end up getting a good bite of the cake, so he deserves it.”

Tuohy is also thrilled for Chris Scott, who became a dual premiership coach after the Cats added to their 2011 grand final win from his first year in charge.

“I hope people recognise just how difficult it is to do what he’s (Scott) done,” Tuohy said.

“Coming to Geelong, I’ve clearly played my best footy, but you’ll have to take my word for it, I’m a much better person now as well.

“The club has good values and treats its people really well.

“I’m just so grateful that I was allowed to come to this club and I’ll always be a Geelong person.”

Zach Tuohy was an especially proud irishman after claiming the AFL premiership in his 250th match. (James Ross/AAP PHOTOS)