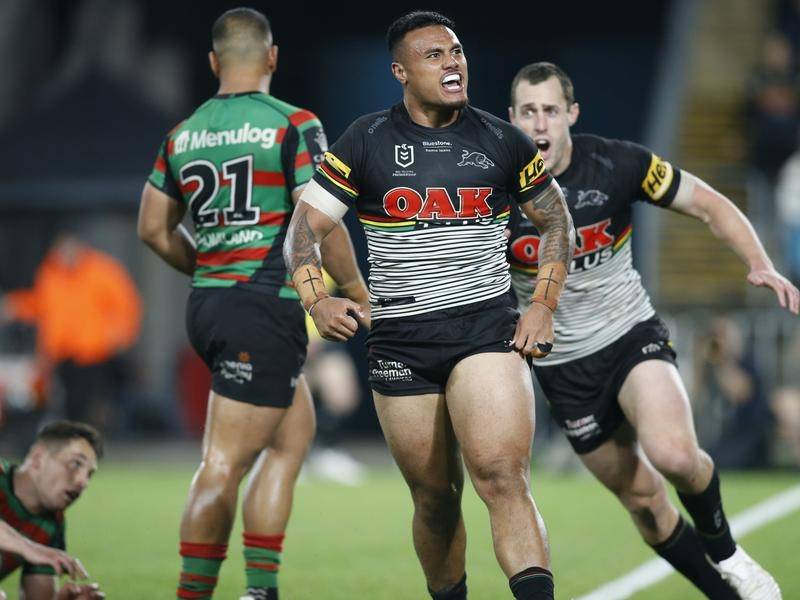 Penrith are through to a third straight grand final after coming from behind to beat South Sydney 32-12 and set up a clash with Parramatta in the NRL decider.

In a drama-charged preliminary final, Penrith trailed 12-0 until four minutes before halftime but led 18-12 soon after the break to take control of the match.

Souths winger Taane Milne also became the first player to be sent off in a finals match in 28 years for a high shot on Panthers prop Spencer Leniu in the final 20 minutes.

Leniu’s fitness will now likely be a concern ahead of the grand final after he was sent for a second head injury assessment.

He had to be pulled away from Milne as the Rabbitoh left the field.

Penrith will also sweat on the availability of Viliame Kikau, who was put on a report for a shoulder charge on Campbell Graham.

Jarome Luai was also penalised for a late high shot on Graham.

Nothing though will spoil the Panthers’ party, as they look in good shape to become only the second team to win back-to-back titles in the NRL-era.

Nathan Cleary was brilliant as always, Kikau powerful in defence and Dylan Edwards superb at the back in both attack and defence.

But after three years of dominance and never needing to overturn a deficit of more than 10 points, they were made to work hard for this win.

They were denied three times by the bunker in the first half, as Souths scored the opening two tries of the game.

The Panthers finally stood up, with Brian To’o providing a play almost as crucial as Stephen Crichton’s intercept in last year’s grand final.

After a quick Kikau play-the-ball allowed Api Koroisau to dart over from dummy- half in the 37th minute, To’o picked up a dropped ball from Graham and raced 80 metres to score on the siren,

His run included an almighty fend on Cody Walker that skittled the Souths’ defence, and turned what could have been an 18-6 lead for the Rabbitohs into a 12-12 deadlock.

And when Kikau produced a charge down on a Lachlan Ilias kick moments after the break and Nathan Cleary grubber-kicked for Leniu, the game was as good as done.

Cleary also scored a late four-pointer of his own as Penrith ran away with it, while his kicking again terrorised South Sydney’s wingers.

Edwards produced several crucial kick returns to put Penrith on the front foot with his 230 metres and he pulled off a number of tackles as the last line of defence.

In comparison, the Panthers managed to keep Latrell Mitchell quiet, with his only real impact coming when he helped put Richie Kennar over for a try on the left wing.

Mitchell, Kennar, Graham and Milne were all regularly hit hard in the first half, while Cody Walker scored Souths’ first try but didn’t have his usual influence.

Penrith have advanced to their third successive NRL grand final after a 32-12 win over South Sydney. (Darren Pateman/AAP PHOTOS)