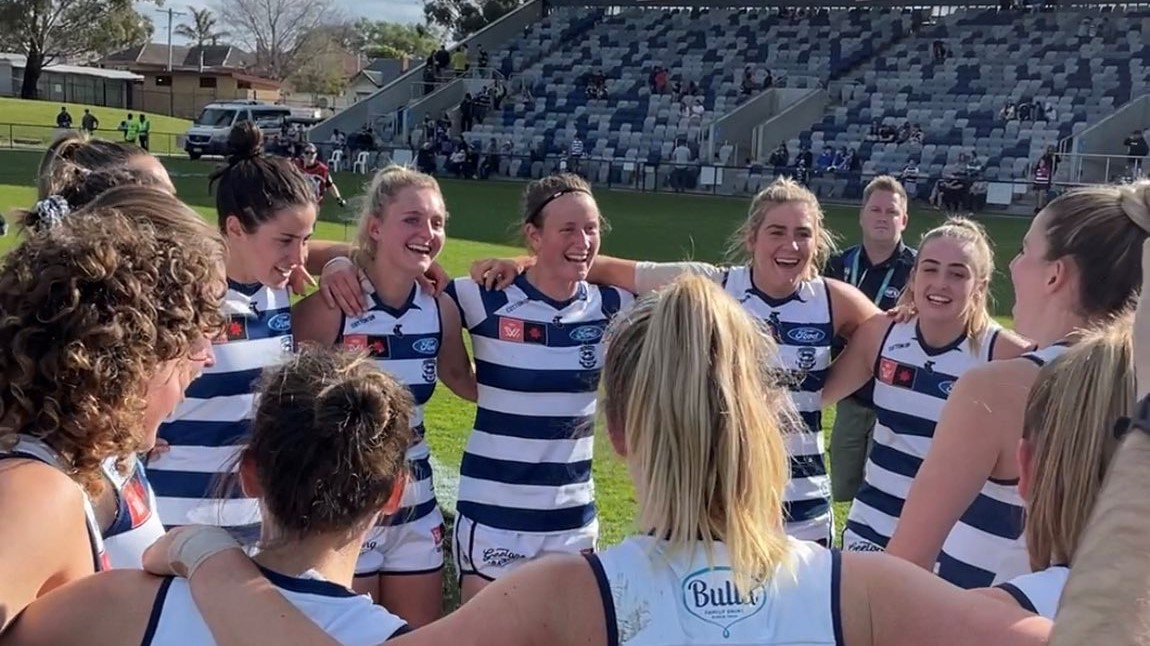 GEELONG has overcome the absence of suspended star Georgie Prespakis to boost its AFLW finals hopes with a thrilling one-point win over the Western Bulldogs.

Prespakis was hit with a two-match ban during the week for a dangerous tackle and watched from the sidelines in Ballarat on Saturday.

Trailing by 19 points early in the final quarter, the Bulldogs kicked the last three goals of the game.

But they left their run too late, with the final major floating through as the siren sounded.

It was Geelong’s first ever AFLW win over the Dogs and took the Cats above their opponents on the ladder with a far superior percentage.

Both sides have 4-2 records.

The result also kept the Cats in the top-four mix.

Morrison (21 disposals), Rebecca Webster (17) and Amy McDonald (15) found plenty of the ball for Geelong, while Scott (two goals) and Chloe Scheer (one) were dangerous in attack.

Bulldogs captain Ellie Blackburn (25 disposals) tried to lift her side and ruck Alice Edmonds fought hard against the tide.

The pair helped the Dogs to a positive 29-19 clearance tally, but Geelong had too many contributors around the ground.

The ball lived in the Bulldogs’ front half for long periods of the opening term as they generated a 10-4 advantage in forward entries.

But the lead was just two points at quarter-time when former Cats star Richelle Cranston missed her set shot after the siren.

Scheer found plenty of space inside-50 to put Geelong in front for the first time early in the second term.

And the Cats, who kept their opponents goalless in the second quarter, would have led by more than seven points at the main break if not for a string of wasted chances in front of goal.

Mia Skinner provided a highlight with a brilliant goal from the boundary line during the third quarter and Geelong looked home early in the fourth term when Julia Crockett-Grills extended the advantage to 19 points.

Rylie Wilcox and Deanna Berry kicked goals to help the Bulldogs fight their way back into the contest and Elle Bennetts’ late shot floated through as the siren sounded.