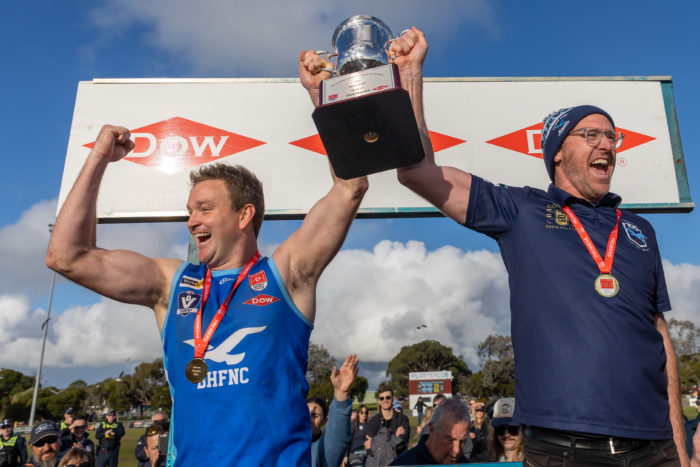 PREMIERSHIP-winning coach Dan Donati says an inability to fully commit to the position in 2023 was behind his decision to step down as Barwon Heads coach.

Donati, who guided the Seagulls to a shock grand final win over Torquay last month, informed the BFL club on Friday he could no longer give the role the attention it deserves.

“I moved down this way and had a good job down here,” he said.

“I fell into a new job halfway through the season, for which I travel interstate often. I’m flying back and forth, driving up and down the highway, (and) I’ve got three kids.

“The last eight or nine weeks were really difficult. I loved it, and I don’t regret one bit of it, but in the end, I’ve got a mantra of family, work and footy.

“I reckon my mantra was backwards for the last eight or nine weeks; footy, then my work and then my family.

“I’m going to have to move back to Melbourne, and it’s going to be too hard for me to commit.”

Donati is confident Barwon Heads is well placed to remain a contender in the coming years and is disappointed he won’t be part of it.

“I’m really excited for the football club and all the people involved at the club that they’ve got a solid foundation to be competitive for the next two, three, four, five years,” he said.

“The club is in a really good position, and I know there’s a number of players keen to come back, and I’d expect them to be right up there again next year.

“I couldn’t be more happy for the football club in that respect.”

As a result, Barwon Heads has wasted no time announcing Donati’s replacement, with 2019 premiership coach Mitch Herbison to share the role with Sam Schaller, the Seagulls’ opposition analyst this year.

“We knew that work pressures and family pressures were immense throughout the year – especially the back half,” he said.

“I didn’t affect us, considering what we did.

“But moving forward, it was going to really difficult.”

“We knew internally we had many good people, and Herbie and Sammy are two of those,” Goddard said.

“We’re really proud we’ve promoted people from within. We know Herbie’s a star, and Sam’s coached junior footy, and he’s got a super footy brain.

“He worked with Dan so well on tactics on and off the field,

“We know Herbie and Sam as a duo will help us to continue to be at the top end of the table.”