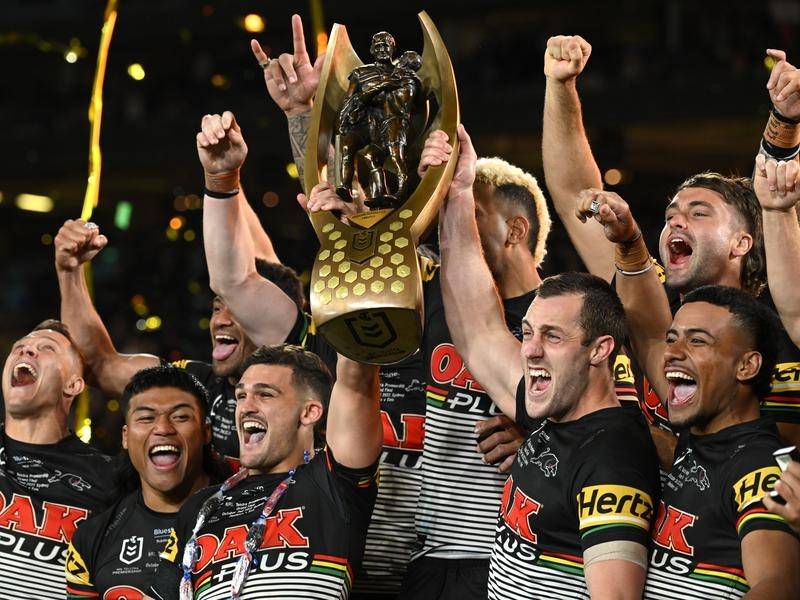 Penrith have sealed their status as one of the NRL’s greatest ever teams, going back-to-back with a crushing 28-12 grand final win over Parramatta.

In one of the most one-sided deciders this century, Penrith blew the Eels off the park in a near-perfect first half before Parramatta’s only two tries came in the final four minutes.

Dylan Edwards was a deserving Clive Churchill Medallist, making 228 metres on the back of his kick returns, producing the cover tackle of the night on Bailey Simonsson in the second half and setting up two tries in the win.

In comparison Mitch Moses was unable to get an attacking kick away until the 40th minute, as their hopes of ending the 36-year drought were quickly extinguished.

It was enough to seal Penrith the fourth title in their history, as they became only the second team to defend their crown in the NRL era.

But the scarier question is when will the Panthers’ dominance stop?

The club won every grade down to under-18s this season, and while they lose Viliame Kikau and Api Koroisau next year they appear set for a dynasty of success.

In the past three years alone they have won 67 of 78 matches, making their run the most dominant since Parramatta claimed three straight titles in the early 1980s.

And after 15 minutes on Sunday, it became evidently clear that there would be no return to the glory days for the Eels.

After a tight opening, Edwards produced his first big moment when Cleary put him into space and the fullback found Stephen Crichton trailing back inside him.

Jarome Luai was also back to his best, making the most of Penrith’s momentum to help put To’o over for their second.

Again, it was the back of a big Edwards kick return as he regularly put the Panthers on the front foot.

At that point Liam Martin looked as if he could score every time he touched the ball on the right and Kikau was busting through tackles for fun on the left.

Cleary also had the ball on a string as he was continually given good ball as Penrith zeroed in on Parramatta’s ball-carriers.

The halfback’s finest play came when he spotted Clint Gutherson in the line and grubber-kicked for Scott Sorensen to make it 18-0 before halftime.

“Our first half was the best we have ever played,” Cleary said.

“We’ve put some really good seasons together but we have never really come off (like that). That’s the best game we could play.

“We have the big photos when we walk into training every day of the 1991 and 2003 (premiership) teams. Now to be a part of that twice, it is pretty crazy.”

The Eels’ only moment of fury came when Mitch Moses was ruled to have initiated contact on Kikau in the lead up to To’o’s second try after the break.

But by then the game was done and Parramatta could only really blame themselves.

They were comprehensively beaten in the middle, gave away an obstruction on their first attacking raid before their two late tries came through Gutherson and Jake Arthur.

The points however would have done little to silence Penrith’s party.

It began when Edwards put Crichton over, ramped up when he chased down Simonsson and put him into touch to deny the winger and then went into overdrive when he sent Charlie Staines over on the next set.

“We gave them way too much ball there in the first half and made 120 more tackles.

“Someone has to lose and unfortunately it was.”