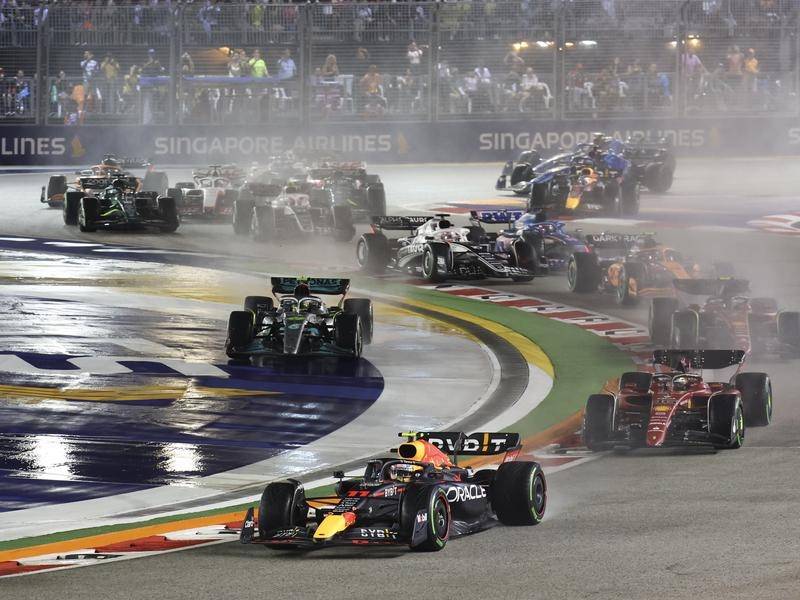 Max Verstappen’s Formula One title celebrations were put on hold after the Red Bull driver placed seventh at a chaotic Singapore grand prix, won by his teammate Sergio Perez.

Perez was being investigated for a potential safety car infringement. It could mean a time penalty of five seconds, in which case the Mexican driver’s lead over Leclerc covered him.

Verstappen’s equal-lowest position this year matches his seventh at the British GP in July. He also had two retirements in the first three races.

Verstappen had won the past five races but needed to win here and finish 22 points ahead of Leclerc to be crowned champion for a second straight season. That could happen next weekend at the Japanese GP.

Verstappen made a mistake after the second safety car restart, following AlphaTauri driver Yuki Tsunoda’s crash on Lap 36. When Verstappen tried to overtake Lando Norris’ McLaren, he locked his tires and needed to pit again.

Leclerc started from pole position with Verstappen going from eighth after a team blunder in qualifying.

The race start was delayed more than an hour to clear water off the Marina Bay Circuit track following heavy rainfall. The tricky conditions led to the virtual safety car (VSC) being deployed three times.

Perez made a good start and jumped past Leclerc while Verstappen dropped several places. The first safety car was on Lap 8 when Zhou Guanyu’s Alfa Romeo was cut off by Nicholas Latifi’s Williams.

Perez got away cleanly at the restart, while Verstappen climbed into seventh behind Fernando Alonso — whose 350th F1 race ended disappointingly when his engine failed on Lap 21, bringing out the first VSC.

With the track still damp, drivers decided against changing to quicker tyres — apart from Mercedes’ George Russell, who struggled for grip.

Hamilton made a rare mistake on Lap 33 and thudded into the crash barrier. Soon after, the leading drivers changed tyres in a flurry of stops. They did so just before the safety car was deployed again following Tsunoda’s error.

Red Bull driver Sergio Perez led the Singapore grand prix at the start and went on to win the race. (AP PHOTO)