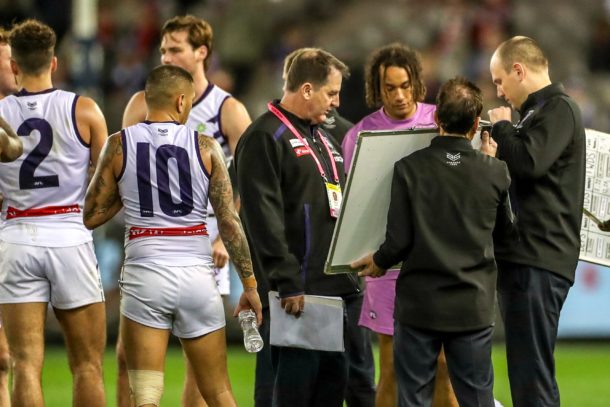 Ross Lyon is set to be confirmed as St Kilda’s coach by the end of week, marking an extraordinary return to the AFL club he dramatically walked out on 11 years ago.

The parties sat down again at St Kilda’s Moorabbin headquarters on Wednesday to further discuss the unlikely reunion.

“I’m just going to meet with the board so it’s just part of it,” Lyon told the Seven Network on Wednesday before entering a meeting.

Lyon coached St Kilda to grand finals in 2009 and 2010 before his bombshell defection to Fremantle at the end of 2011.

In one of the biggest AFL stories this century, the Dockers abruptly dumped Mark Harvey as coach before 24 hours later naming Lyon as their new leader.

Lyon led the Fremantle to the club’s first and only grand final appearance in 2013 but was sacked in late-2019, having missed the finals in four consecutive seasons.

He has since held media roles and spent time focusing on business interests.

If Lyon does return to St Kilda, he would be the first coach since David Parkin in 1991 – following a six-year break from Carlton – to have a second full-time stint in charge of an AFL club.

James Hird was forced to sit out the 2014 season as a result of Essendon’s supplements saga but never actually quit the Bombers.

Lyon said on Monday it was a “delicate time” and claimed he was still weighing up whether he wanted to coach again after three years out of the system.

A number of retired St Kilda heroes, including Brendon Goddard and Stephen Milne, have come out in support of Lyon returning to Moorabbin.

Since Lyon led St Kilda to four-straight finals appearances between 2008 and 2011, the Saints have made the top-eight just once – a fifth-place finish in 2020.