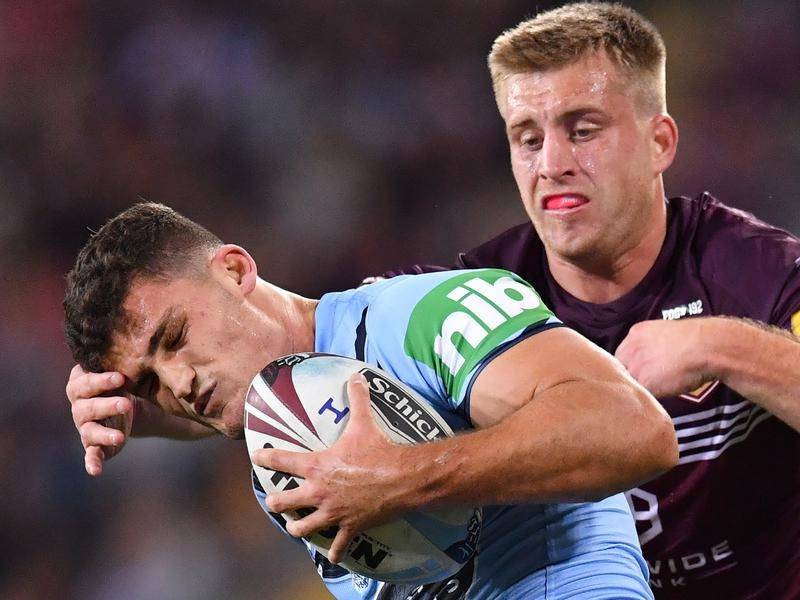 Opposites attract, and that’s why Cameron Munster says he and Nathan Cleary enjoyed such budding chemistry in their first Kangaroos Test together.

Munster and Cleary, on debut, put Scotland to the sword in Friday’s 84-0 Rugby League World Cup victory to secure Australia’s passage to the knockout stages.

It was the first time the duo had played alongside each other after being rivals at club and state level for nearly five years.

Cleary put on 28 points and Munster had five try assists, creating more uncertainty for Kangaroos coach Mal Meninga over who his halves pairing will be heading deeper into the tournament.

Daly Cherry-Evans was rested for the game with the Scots and Meninga said the usually reserved Cleary would now feel like he belonged in the squad.

Munster by contrast is one of this squad’s more outgoing characters and said he hoped Cleary would feel emboldened by his debut.

“I am trying to warm him up a little bit,” Munster said.

“We’re rooming together for the next couple of days so I’ll try and get him out of his shell.

“I feel like he’s a calm kid and not much gets under his skin.”

Munster is one of the few team members who seems assured of a starting spot after his heroics for Queensland in State of Origin this season.

The Melbourne five-eighth said he was happy to let Cleary guide the side around as he watched the young halfback go to work in their domination of the Scots.

But Munster said he had yet to be approached by Meninga for his opinion on who the Kangaroos’ first-choice halfback should be, arguing that would be an unwise move.

“If you start asking me for opinions and guidance you know we’re going backwards,” he said.

“I want to take a backward seat and let Mal take care of his thing.”

Australia’s players are heading for a golfing trip in Scotland before returning to their Manchester base ahead of next weekend’s final group game with Italy.

There may be a temptation for Meninga to deploy Cherry-Evans and Cleary together but Munster said he would prefer to keep playing rather than be given a rest.

“I didn’t do enough to earn a rest (against Scotland),” he said.

“I’m happy to go out there next week. I can keep being consistent and get that repetition in (if I play).

“When we play those harder teams later in the quarter-finals and semi-finals, I want to be in tip top shape.”