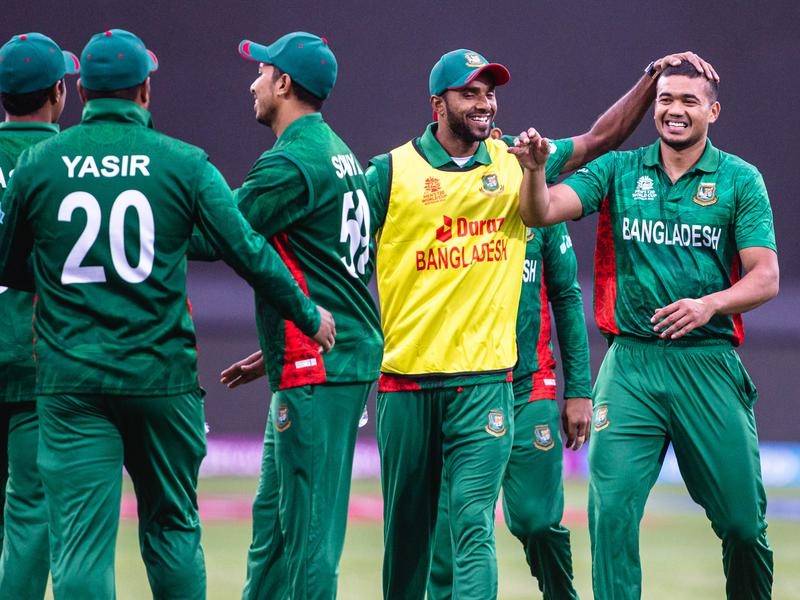 Bangladesh quick Taskin Ahmed has picked up a career-best 4-25 as his side opened their Twenty20 World Cup with a breakthrough nine-run win over the Netherlands.

Playing their first match of the tournament, Bangladesh posted 8-144 in Hobart on Monday afternoon, bowling the Dutch out for 135 on the last ball.

It was the first time Bangladesh have won a match in the main ‘super’ stage of a T20 World Cup and breaks a five-match losing streak in the 20-over format.

Ahmed was on a hat-trick after removing Vikramjit Singh and Bas de Leede with the first two balls of the Dutch chase and returned late to pick up two scalps.

The Netherlands were in all sorts of trouble at 4-15 when Max O’Dowd and Tom Cooper were both run out in a calamitous fourth over.

Colin Ackermann kept them in the game with a 48-ball 62 but fell in the 17th over to Ahmed.

The Netherlands needed 24 off the final over and 12 from the last two balls but couldn’t get the job done.

Earlier, Afif Hossain top-scored with 38 from 27 balls for Bangladesh after they lost the toss and were sent in under gloomy skies at Bellerive Oval.

Najmul Shanto (25) and Soumya Sarkar (14) put on 43 for the first wicket before the Netherlands broke through with two scalps in the space of two overs.

Young spinner Shariz Ahmad picked up the big wicket of Bangladesh skipper Shakib Al Hasan (seven) in the 10th over.

Hossain played the lead role in his absence, before Mosaddek Hossain (20 not out from 12 deliveries) landed some important lusty blows late.

Both teams are involved in a double header at the SCG on Thursday, with Bangladesh playing South Africa and the Netherlands facing India.

Taskin Ahmed (R) has bowled Bangladesh to victory over the Netherlands in the Twenty20 World Cup. (Linda Higginson/AAP PHOTOS)