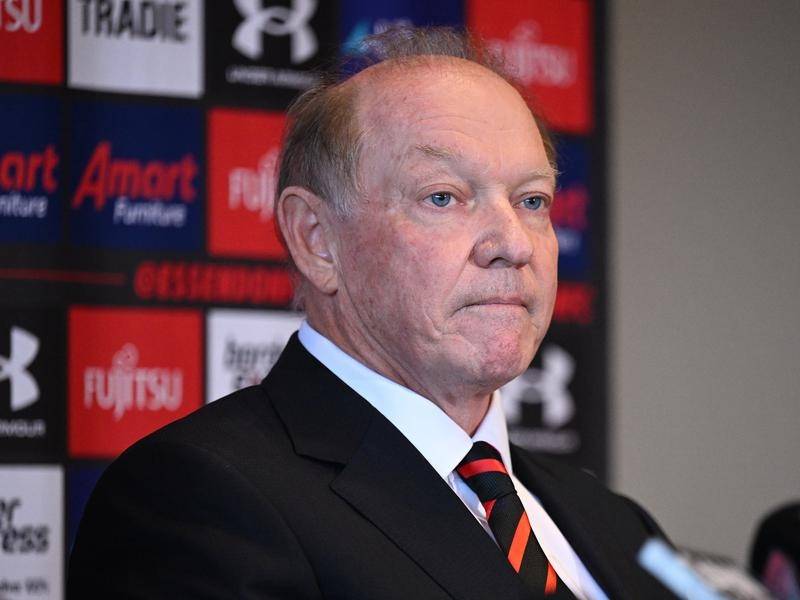 Essendon’s football department has lacked unity and their players have lacked fitness, with the troubled AFL club promising a new-look football program next season.

Bombers president David Barham has revealed more details of the external review that was commissioned nearly two months ago to look at all areas of the club.

In a letter to members on Monday, Barham also said the club would soon appoint an inaugural First Nations board member.

He added the process to replace chief executive Andrew Thorburn, who lasted just 24 hours in the role, was also “well underway”.

Essendon have had a disastrous year on and off the field, dropping out of the top eight.

Thorburn replaced Xavier Campbell as chief executive, but resigned the next day in the wake of a bungled appointment process.

He left the Bombers because of his role as chairman of a church with divisive views around abortion and homosexuality.

Barham said in his letter the review found a need for “stronger alignment of the core functions” in their football department.

“The areas of coaching, physical performance, player development plus list management and recruitment have lacked unity and a shared vision that is embraced by all,” he said.

“Creating a strong and unified football department is a key priority for general manager of football Josh Mahoney and Brad Scott during this off-season.”

Player fitness will also be a focus for Scott in his first pre-season at the club.

“The review also recommended the need to drive higher training standards and to build a better fitness base for our players leading into the season,” Barham said.

“We have accepted this, and … Scott has committed to a demanding pre-season designed at improving the consistency of our training standards across the entire playing group.”

On Monday, Barham added the role of club’s VFL coach would become a full-time position.

Essendon previously had announced they would have two new football roles – general manager of performance and head of development.

“The club is committed to restoring our leadership position in the Indigenous community and nurturing Indigenous talent – both players and staff,” he said.