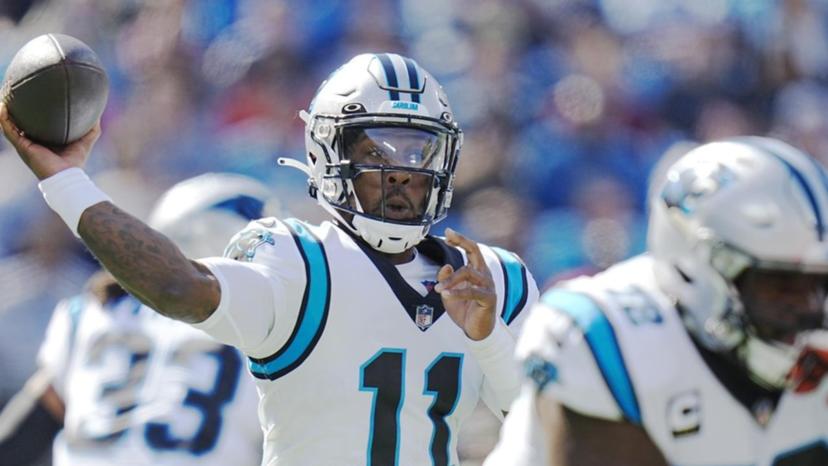 Tom Brady and the Tampa Bay Buccaneers fell below .500 with a stunning 21-3 loss away to the Carolina Panthers, who won their second NFL game of the season despite using a third-string quarterback and an interim head coach.

Brady was 32-of-49 passing for 290 yards for the Bucs (3-4) on Sunday. One of those incompletions came when a wide-open Mike Evans dropped what would have been a 64-yard touchdown on the third play of the game.

Brady hasn’t had a losing record this far into a season since the 2002 New England Patriots dropped four straight games to reach 3-4.

PJ Walker threw for 177 yards and two touchdowns for Carolina (2-5) in place of the injured Baker Mayfield and Sam Darnold. The Panthers won for the first time under interim coach Steve Wilks, who replaced Matt Rhule when he was fired on October 10.

Tampa Bay’s defence allowed the Panthers to rush for 173 yards. D’Onta Foreman ran for 118 yards, and Chuba Hubbard added 63 yards and a touchdown.

Aaron Rodgers and the Green Bay offence faltered as Washington handed the Packers their third straight loss in a 23-21 result in Maryland.

Nursing a sore thumb and out of sync with receivers, Rodgers was 23 of 35 for 194 yards, and the Packers went 0 for 6 on third down.

Green Bay (3-4) had just 232 total yards of offence to Washington’s 364 and lost Allen Lazard to a shoulder injury, making him the team’s third wide receiver to go down during the first losing streak under coach Matt LaFleur.

Washington’s front four also played a role in frazzling Rodgers and making him look more like a rookie than a 38-year-old four-time MVP. Only a series of penalties against the Commanders (3-4) made the game close in the final minutes.

Patrick Mahomes threw for 423 yards and three touchdowns as Kansas City rallied from a double-digit deficit to win 44-23 at San Francisco.

Mahomes made a rough start in this Super Bowl rematch with his early interception putting Kansas City (5-2) in a 10-0 hole. But he led the Chiefs to touchdowns on six of the next seven drives.

Mecole Hardman scored on two TD runs and an eight-yard catch, Justin Watson caught a four-yard TD, and JuJu Smith-Schuster finished it off with a 45 yard catch-and-run. Clyde Edwards-Helaire also scored on a 16-yard run.

Kansas City improved to 13-9 with Mahomes when falling behind by at least 10 points, including the Super Bowl win over the 49ers (3-4) following the 2019 season.

PJ Walker helped Carolina to a shock 21-3 win over Tampa Bay in the NFL on Sunday. (AP PHOTO) Credit: AP