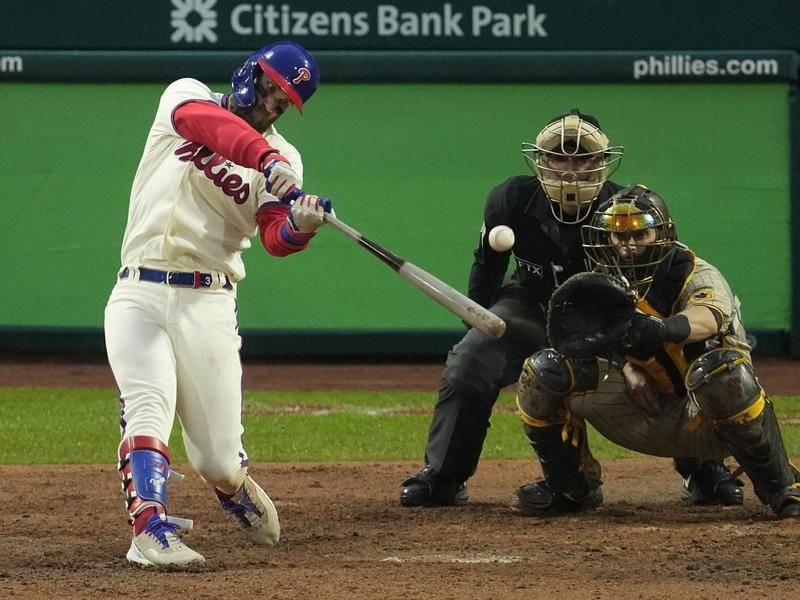 Bryce Harper slugged his fifth homer of the post-season – a two-run blast in the eighth inning – as Philadelphia powered past the San Diego Padres 4-3 and into Major League Baseball’s World Series for the first the time since 2009.

Houston will host the Phillies for Game 1 of the World Series on Friday, after beating the New York Yankees 6-5 in the Bronx on Sunday night for a four-game sweep of the American League Championship Series.

Philadelphia, also boosted by Ryan Hoskins’ two-run homer, capped their improbable run to the National League pennant with a 4-1 series win on Sunday against San Diego, earning their a shot at a first World Series triumph since 2008.

Harper has made the monumental feat of hitting a baseball look easy in the post- season, and he delivered again with easily the biggest hit in his four-year Phillies’ career.

JT Realmuto began the eighth inning with a single off reliever Robert Suarez, before Harper lined a 2-2, 98 mph sinker into the left-field seats as another sellout crowd of 45,485 fans shook Philadelphia’s Citizens Bank Park.

“I knew he was going to come with his heater,” the two-time NL MVP said. “I just tried to take the best swing I could and was able to do damage with it.”

Philadelphia finished third in the NL East with an 87-75 win-loss record, finishing a full 14 wins behind the 101-win Atlanta Braves, and were the last club in the majors to make the 12-team playoff field.

After a 2-0 sweep of NL Central champion St Louis in MLB’s newly created wild- card round, the Phillies needed only four games to knock out Atlanta, the defending World Series champs.

In New York, Yordan Alvarez and Alex Bregman delivered big hits as Houston advanced to the World Series again, aided by another defensive gaffe from the under-achieving Yankees.

Taking advantage of a costly error by second baseman Gleyber Torres to produce the go-ahead rally in the seventh inning, the Astros won their second consecutive pennant and fourth in six years.

After losing to Atlanta in last year’s World Series, Houston earned the fifth pennant in franchise history and another chance at its second World Series championship.

The team’s 2017 title was tainted by a cheating scandal, after allegations they had intercepted rivals’ coded pitching signals.