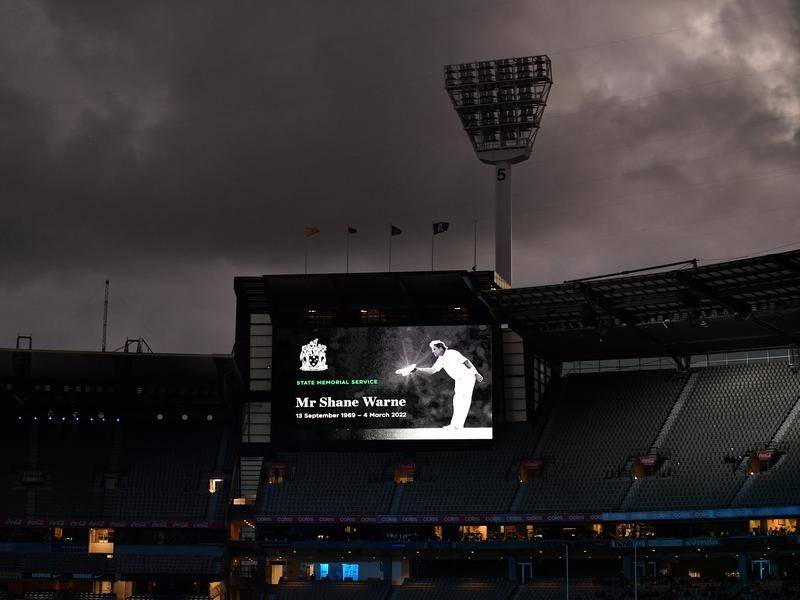 Aaron Finch knows Australia’s first match at the MCG since Shane Warne’s death is going to be an emotional affair.

A crowd of more than 80,000 is expected for Australia’s must-win Twenty20 World Cup clash with England on Friday night.

It will be the first time an Australian team has set foot on the famous Victorian arena since Warne’s shock death in March and the Great Southern Stand at the ground was renamed in honour of the cricketing icon.

Warne’s memorial service, attended by more than 50,000 people, was even held at the MCG, the venue where he took an Ashes hat-trick and claimed his 700th Test wicket.

“It will be tough,” Finch, Australia’s T20 captain, said on Thursday.

“(He’s) someone who had such an impact on so many guys with us growing up, him being our idol, knowing him personally and being a Victorian.

“Coming to the ‘G so many times and watching him do his thing and perform unbelievably well is really special.

“It will be difficult, but I hope everyone can celebrate it as well.”

Warne’s larger-than-life presence would have been on full display at the first T20 World Cup to be held in Australia.

The legendary legspinner’s legacy extended all across the world, with his passing mourned in every cricket-loving nation.

India legend Ravi Shastri, who is in Australia to commentate on the tournament, will deeply miss Warne’s exuberant personality in the media area.

“His influence on the game worldwide is phenomenal,” Shastri told AAP last week.

“It really touched the hearts of a lot of Indians when he passed away.

“I know if he was around the banter would have been unbelievable.

“You feel sad because he was a mate, he was a good mate of mine, so it does hurt.”

It has been a painful year for Australian cricket, with influential wicketkeeper Rod Marsh passing away only hours before Warne after being placed in an induced coma following a heart attack.

In May, former Australia allrounder Andrew Symonds was tragically killed, aged 46, after a car accident near Townsville.

The Australian cricket team will remember Shane Warne when they meet England at his beloved MCG. (Joel Carrett/AAP PHOTOS)