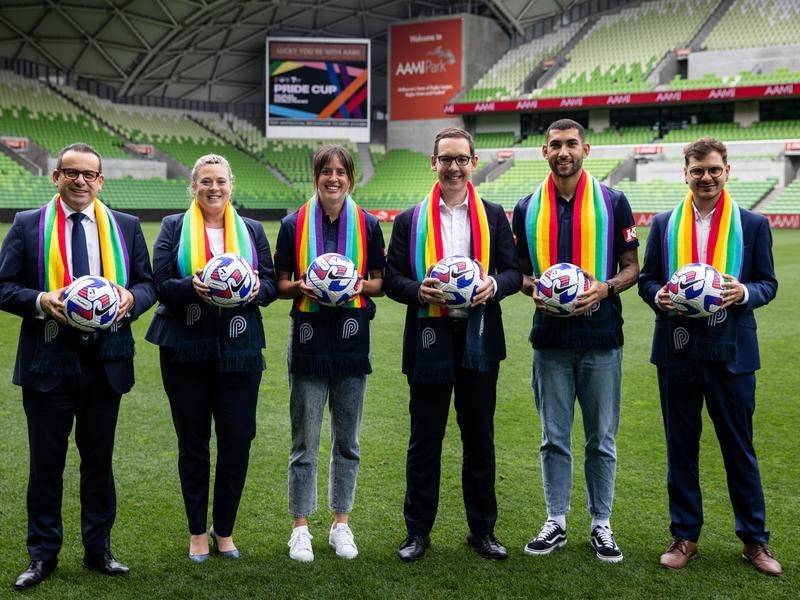 As professional athletes find their voices, Melbourne Victory’s George Timotheou and Kayla Morrison expect footballers to only become more determined to stand up for causes they believe in.

The past fortnight has proved a flashpoint for athletes taking a stand, regardless of the potential financial consequences or other repercussions.

The Diamonds’ solidarity for Indigenous teammate Donnell Wallam’s reluctance to wear a Hancock Prospecting logo came to a head with the mining company pulling the pin on its Netball Australia sponsorship.

Meanwhile, Pat Cummins confirmed he will not appear in any advertisements for Cricket Australia sponsor Alinta Energy this season due to his stance on climate change.

Then, on Thursday, the World Cup-bound Socceroos called for Qatar to decriminalise same-sex relationships and honour workers’ rights.

Victory will host Adelaide United in the Pride Cup, an A-League Men/Women double-header at AAMI Park, on Sunday February 26.

ALM defender Timotheou is a friend and former Adelaide teammate of Josh Cavallo, the only active openly gay player in the competition.

A year on from Cavallo’s coming out announcement, Timotheou said the 22-year-old had also given players confidence to front causes they believed in.

“We have this platform in the public eye to speak out and if there are these social issues or broader issues that we can project with our voices, people are going to listen,” Pride Cup ambassador Timotheou told reporters.

“Because kids look up to footballers, to sporting figures, and if we can make a positive change, then we will – no matter the repercussions.

“It just goes down to your values and who you are as a person. I don’t think we should shy away from standing up for what we believe in.

Women’s football has long been a safe haven for the LGBTI+ community.

“There are a lot of girls who stand for a lot of things,” she said.

“Victory’s amazing. Their doors are always open if you want to come have conversations.

“You do see it a lot more nowadays, girls are standing up for a lot of things that are close to them and in turn, other girls are hopping on board as well.”

The Victorian government will be providing $200,000 in educational support and activations for the Pride Cup.