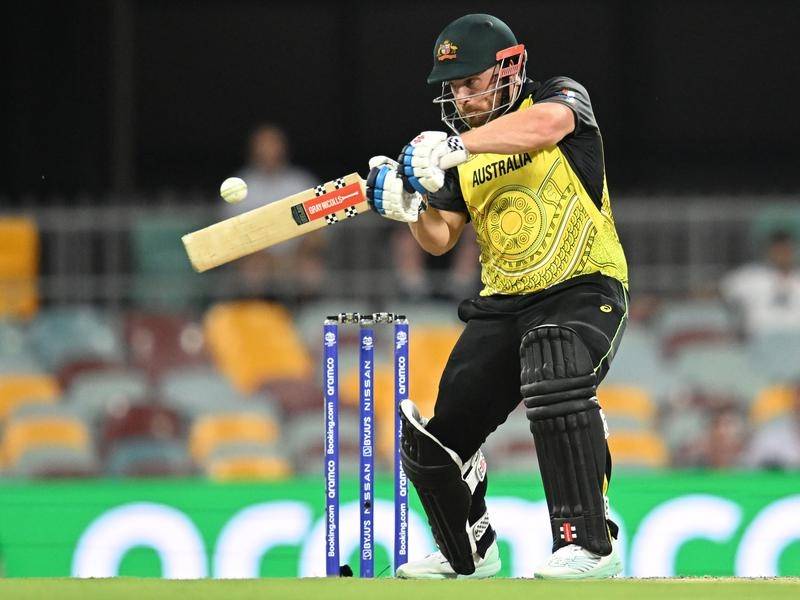 Aaron Finch has fired with the bat for Australia but suffered a hamstring injury as the bowlers did the job in a vital 42-run win over Ireland in the T20 World Cup clash in Brisbane.

Finch (63 off 44 balls) paced his powerhouse and classy innings to perfection to lift Australia to 5-179 after they were sent in by Ireland.

The Australia captain then pulled all the right reins in the field in the early overs as the Irish were dismissed for 137.

It was Finch’s hamstring that was the team’s biggest problem. He had left for the dressing room by the end of the seventh over to get treatment for an injury he appeared to aggravate after sustaining it while batting.

“It is a little hammie twinge I think,” Finch said while receiving the man of the match award.

“I will get scanned tomorrow. Unfortunately I have a history of them so we will see how it goes. It doesn’t feel too bad but generally overnight they can stiffen up.

“I am very hopeful (of playing Afghanistan on Friday).”

Wicketkeeper Matthew Wade took over in Finch’s absence but Australia took their foot off the throat when their regular skipper left the field.

Tim David failed to return after he made an unbeaten 15 with the bat while Marcus Stoinis also left the field as Australia finished the match with three substitute fielders.

David and Stoinis have hamstring tightness but neither is in doubt for the clash with Afghanistan in Adelaide.

The win elevated Australia to five points on the Group 1 ladder and equal with New Zealand, but their net run-rate (-0.30) is still worse than England (0.24) who are on three points and face the Kiwis on Tuesday night at the Gabba.

Australia had to win by 75 runs to get their net-run rate above England.

Finch threw the ball to Glenn Maxwell in the third over and the allrounder responded with two wickets.

In the space of 13 deliveries Ireland slumped to 5-25 with paceman Mitchell Starc following Maxwell and claiming two scalps in his first over.

A rout was on the cards but Ireland batter Lorcan Tucker (71no off 48) played a superb lone hand.

Earlier Finch and Marcus Stoinis (35 off 25) went berserk in a 70-run fourth-wicket stand to ensure the bowlers had a total to defend.

The pair had guided Australia to victory in Perth against Sri Lanka but on that occasion it was Stoinis doing all the damage.

Finch found his groove this time and was just as severe on the Irish bowlers.

The ferocity of the duo’s onslaught rattled fast bowler Mark Adair into bowling five wides in an 11-ball over that went for 26 runs.

“It got away from us at stages and we clawed it back at stages,” Ireland captain Andy Balbirnie said.

“We have to remind ourselves that we are playing the world champions in their own backyard… so I can’t be too critical of our bowlers.”

Ireland paceman Barry McCarthy (3-29) dismissed David Warner (3) with his first delivery and was the pick of their attack.