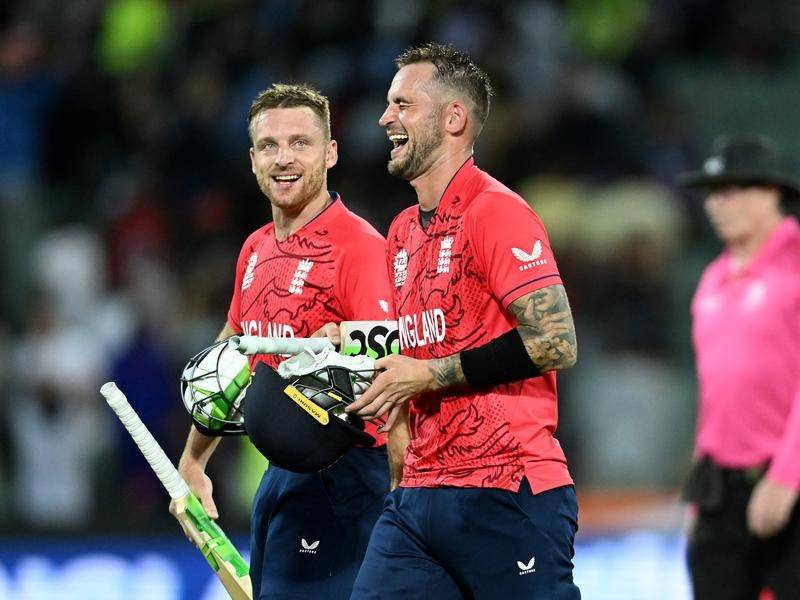 After more than three years in the wilderness, Alex Hales has led England to the promised land with a match-winning knock against India in their T20 World Cup semi-final.

Set 169 runs to win, Hales blasted 86 not out from 47 balls as England reached 0-170 with 24 balls to spare in Thursday night’s semi-final at Adelaide Oval.

England’s stunning 10-wicket win sets up a Sunday night final against Pakistan at the MCG.

India posted 6-168 with Hardik Pandya (63 from 33 balls) smacking five sixes and Virat Kohli (50 from 40 balls) making his fourth half-century from six knocks in the tournament.

But Hales and his captain Jos Buttler (80no from 49 balls) launched an audacious chase: they took 63 runs from the initial six overs and reached a century stand from just 10.1 overs.

Hales was banished from England’s white-ball set-up after a second failed drugs test for recreational substances ruled him out of the 50-over World Cup in 2019.

He didn’t play for his country again until less than two months ago when recalled to the T20 squad after prolific run-scoring in Australia’s Big Bash League.

The powerful opener, who was also involved in Ben Stokes’ brawl in Bristol in 2017, stunned India with a daring innings featuring seven sixes and four fours.

Hales’ knock overshadowed his skipper Buttler’s superb contribution: the skipper set the tone in the opening over of the chase by smacking Bhuvneshwar Kumar for three fours.

The pair put on the highest-ever partnership in T20 World Cups.

Their feat was also England’s highest opening stand in T20 cricket and the nation’s second-largest union for any wicket in the shortest format.

Earlier, Kohli boosted his tournament record to 296 runs at an average of 98.67.

And Hardik provided fireworks in a late assault as India smashed 68 runs from their last five overs.

Hardick cracked five sixes and four fours in an onslaught which ended on the last ball of the innings when he trod on his stumps facing Chris Jordan (3-43).

Both are rated a chance of recovering for Sunday night’s cup finale against Pakistan, who downed New Zealand by seven wickets on Wednesday night.