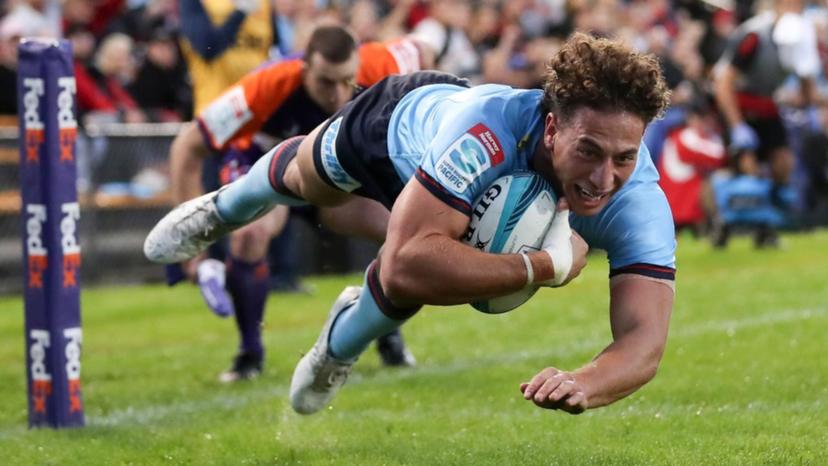 Dave Rennie doesn’t believe he’s rolling the dice after picking the least experienced Wallabies line-up of his 32-Test tenure for a hiding-to-nothing showdown with Italy.

Rennie will blood X-factor Mark Nawaqanitawase in Florence on Saturday while the winger’s NSW Waratahs teammate Ben Donaldson could also earn his first cap after being named on the bench as the reserve five-eighth.

All up, Rennie’s 23-man squad features eight players with less than 10 Tests each under their belts.

Under pressure to improve on an unflattering 39 per cent winning strike rate since succeeding Michael Cheika in 2020, Rennie risks becoming the first Wallabies coach to lose to Italy in 19 Tests against the Azzuri, who impressed when beating Samoa 49-17 last weekend.

But the New Zealander is bravely laying his reputation on the line for the greater good of the Wallabies, intent on building depth ahead of next year’s Rugby World Cup in France – come what may.

“Every game is a challenge over here. We knew that,” Rennie said when asked if he was making a selection gamble with his relatively greenhorn outfit.

“We were playing five Tests, which no one else is doing. You can’t churn out the same side five weeks in a row and expect to be at our best late in the tour so we’ve got confidence in the group.

“We’ve got really good depth. When you look at the team, it’s a good side. We expect them to front. They’ve prepared really well so far.”

McReight is deputising for champion former Wallabies captain Michael Hooper, while outside back Jordan Petaia, and back-rower Langi Gleeson, hooker Lachlan Lonergan and lock Darcy Swain – who only earned a call-up after Matt Philip suffered an ACL tear the day the Wallabies flew out for Europe – will don the gold jumper for the first time on the tour after winning bench spots.

But Nawaqanitawase has the best tale for his grand children.

The 22-year-old had just landed in Auckland last month for a holiday with his girlfriend when he received a call from Rennie asking him to return to Sydney to join the spring tourists.

Now Nawaqanitawase is making his Test debut with a chance to press his claims for a World Cup berth.

“He’s had a hell of a season, was excellent for Australia A in Fiji and Japan,” Rennie said.

“He’s a big man so aerially outstanding going forward and under the high ball.

“Has got the ability to beat defenders, got post-tackle presence, made big shifts defensively, kicks the ball well.

“He’s a big man and generally we’ve got a small backline so it gives us a point of difference.”

Winger Mark Nawaqanitawase will debut for the Wallabies against Italy. (Brendon Thorne/AAP PHOTOS)