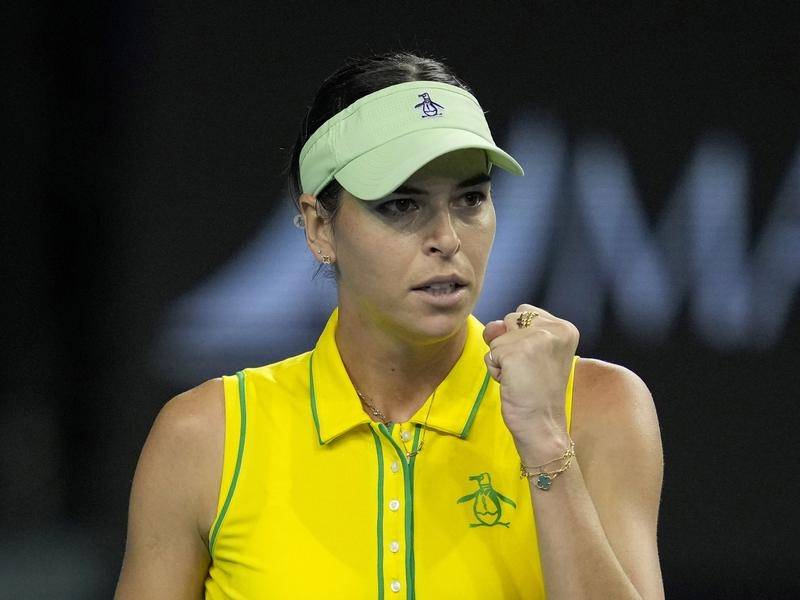 Storm Sanders and Ajla Tomljanovic have swept Australia’s women into the semi- finals of the Billie Jean King Cup in Glasgow.

The pair, who had both won their singles matches in Tuesday’s victory over Slovakia, again produced the goods to seal a 3-0 whitewash of Belgium in Thursday’s winner-takes-all group decider.

Sanders, a lowly No.237 in the world, appeared once again to be inspired by the singles responsibility for her country as she blew away Alison Van Uytvanck 6-2 6-2 to put Australia one-up.

Then Australia’s top player Tomljanovic defeated Belgium’s ailing No.1 Elise Mertens, who had to retire with an arm injury when 3-0 down in the deciding set.

With the tie already won, Sanders then returned to the Emirates Arena hardcourt, teaming up with the veteran Sam Stosur to beat Ysaline Bonaventure and Kirsten Flipkens 6-4 6-3 in the doubles to complete a perfect day for Alicia Molik’s team.

It ensured they made the last-four for the second year running as they seek to win the event, formerly known as the Fed Cup and considered the World Cup of women’s tennis, for the first time since 1974.

Sanders may not have won a singles in a WTA tour main draw all year while making the top-10 in the doubles, but she always seems inspired when given key responsibility in the green and gold.

Against world No.54 Van Uytvanck, she made a nonsense of the rankings, dominating with excellent serving and her powerful forehand to draw first blood for the Australians after less than an hour and a quarter.

“It was actually a tough match, and obviously playing for your country, it’s quite emotional,” said Sanders, who had also beaten Slovakia’s Viktoria Kuzmova in Australia’s opening win.

“The game plan kind of goes out the window and you’ve just got to play with fight and determination and just try and stick with it. I think that’s what I did today. I’m proud of myself.”

Sanders’ attacking approach saw her sweep through the first set in just 23 minutes, but the key was a marathon first game of the second set in which Rockhampton’s Sanders saved five break points before holding.

After that, she never looked back, crashing 18 winners as she earned her fourth BJK Cup singles win in just five matches.

At that point, there was still hope for Belgium that they could still rob Australia of qualification and earn the semi-final place if they could win the remaining two rubbers without dropping a set.

And Mertens, having jetted in on a marathon, three-flight journey from Texas to Glasgow following her WTA Finals doubles triumph, kept the flame burning when taking the opening stanza 6-4 against Tomljanovic and leading 4-1 with a double break in the second.

But the Australian No.1 is made of sterner stuff these days, fighting back to win eight games in a row as Mertens began to struggle with double-fault trouble and discomfort from what appeared an injured shoulder.

“She came out firing, serving great, kept me on my toes with mixing it up a lot. I just struggled to find my rhythm, my game, but the key was just to not give up,” said Tomljanovic.

“Every match, you’re learning something new, and that was just confirmation that you never, ever give up.”

The Australian were left waiting to learn their semi-final opponents, with their British hosts battling with Spain for the spot.

Ajla Tomljanovic was the picture of determination as she powered Australia to the BJK Cup semis. (AP PHOTO)