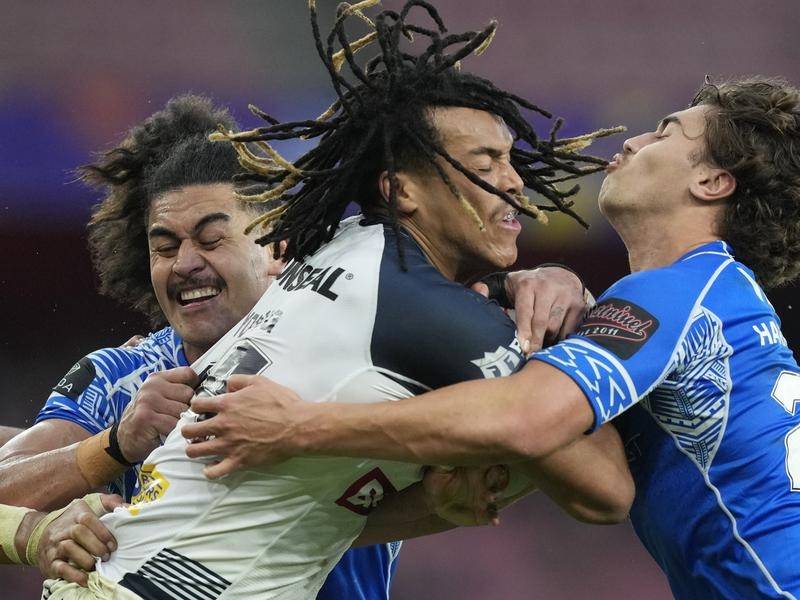 Samoa have created history, becoming the first tier-two nation to advance into a Rugby League World Cup with a golden-point extra-time 27-26 win over England.

Penrith centre Stephen Crichton delivered with the clutch play in the 84th minute after a chaotic semi-final in front of 40, 489 fans at the Emirates Stadium.

Samoa will play Australia at Old Trafford next Saturday (Sunday AEDT) after completing one of the most remarkable turnarounds at a tournament in recent memory.

The drama-filled win in north London came less than a month after Samoa had kicked off their Rugby League World Cup campaign with a 60-6 group stage defeat at the hands of the English.

“We’ve got each other’s back – plenty of people had plenty to say about going home on planes and all that,” said Samoa coach Matt Parish.

“It’s inspirational, to put Samoa – a tiny little dot in the middle of the Pacific – into the final, it’s incredible.”

Things are about to get tougher for the Samoans, however, with hooker Nu Brown concussed and captain Junior Paulo potentially facing suspension for a spear tackle on England prop Tom Burgess.

Paulo was sin binned in the first half and his hopes of playing in his nation’s first-ever final will rest in the hands of the tournament’s match review committee.

“It was unintentional. How important this game is – I can’t imagine myself missing out on the biggest game in Samoa’s history.”

While Samoa were rejoicing, England were left to lick their wounds.

Shaun Wane’s side had arguably never had a better chance to win a tournament or at the very least get to a final.

The draw was slanted in their favour to guarantee that they avoided New Zealand and Australia until the last game and Wane was almost moved to tears after the game.

“It was not good enough,” he said.

“All credit to our players on what they did in this tournament but not doing those small details cost us dearly.”

England were stuck in the blocks when Samoa scored after just five minutes, Tim Lafai running through a meek tackle from Kallum Watkins.

Elliott Whitehead hit back for England but Samoa found themselves up 10-6 at half-time when Ligi Sao scooted from dummy half to breeze through a hole left by Watkins.

The second half was chaos. Lafai fumbled a ball on his own line and John Bateman dived on it to score.

Crichton went in for Samoa after a no-look offload from Paulo as he fell in the tackle and then Lafai made amends to push them out to a 20-12 lead and Watkins was subbed off.

England centre Herbie Farnworth barged through six tackles to get his side back in the game with Tommy Makinson converting and then adding a penalty to draw England level at 20-all.

More drama was to come as England went searching for a winner.

Crichton intercepted a Victor Radley pass in the 72nd minute before Farnworth dashed over in the 77th minute to tie up the game.

Anthony Milford failed with Samoa’s first attempt at a field goal, before Crichton kicked the winner to make history and set up a meeting with Australia.

“Belief was everything within this team,” Paulo said. “We’re going to give ourselves a chance.”