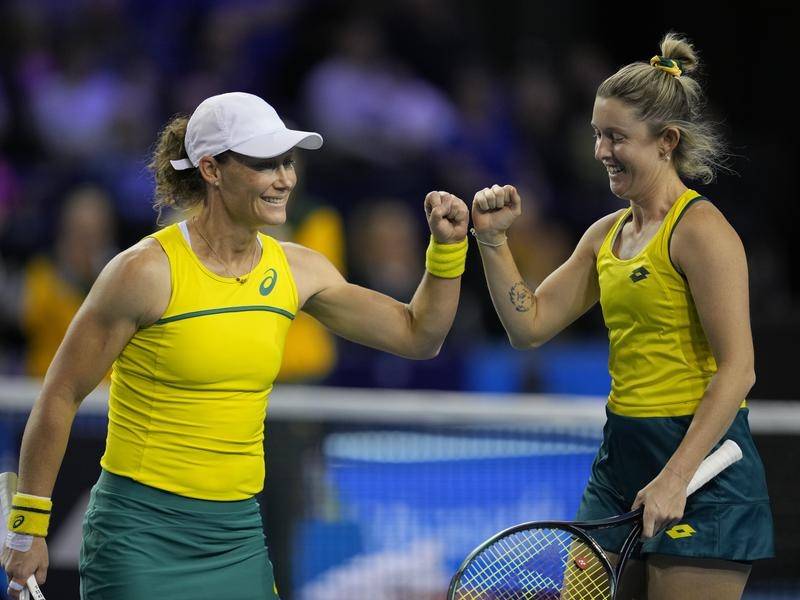 Just when she thought she might have seen and done it all in her landmark tennis career, Sam Stosur is ready for one last dance.

At 38 years old, not having played since an early US Open exit and without any win since June, Stosur knew it was possible her main role at this week’s Billie Jean King Cup might be as a distinguished cheerleader on the Australian team bench.

Instead, the first lady of Australian tennis was asked by Alicia Molik to step up and play in two crucial doubles alongside Storm Sanders – and Stosur did so to such telling effect that she’s now eyeing the one prize she’d always fancied in Sunday’s final.

“This is why I’ve kind of hung around playing a bit. You want moments like this,” beamed Stosur, after she came up big with Sanders in a final-set super-tiebreak decider to edge out the British pair of Olivia Nicholls and Alicia Barnett and seal the 2-1 semi-final win over the hosts in Glasgow on Saturday.

“I knew it was a possibility that I may or may not get a run out here this week. Obviously, with Storm and Ellen (Perez), they are both far higher ranked than me at the moment,” mused Stosur, who, while now retired from singles play, has dropped to 113 in the doubles rankings.

“I have had a bit of a rough year results-wise, but one thing I knew going into this week is that I had done everything I could to get myself as ready as possible to play, and if I got called up, then I was going to give it everything I had.”

Brought in to replace Perez in the second tie against Belgium in midweek, she and Sanders won in straight sets and were asked to reprise their purring partnership on Saturday, where Stosur’s coolness under pressure after 19 years of team combat proved invaluable.

Stosur has played in the BJK Cup in both its previous two incarnations, the Federation Cup and Fed Cup, and has now won 39 times – but still, the world title has eluded the former US Open champion after her 2019 near-miss in the final against France.

Asked afterwards if she still thought she might be going strong as a player at 40, she noted: “Probably not – but, you know, if we do manage to win tomorrow, then that would be an incredible moment.

“I have been pretty lucky to have some pretty incredible moments in my career, and weeks like this and matches like this and days like this are what you play for. You want to be out there amongst it.

“If my role is on the court, that’s great. If that’s cheering from the sideline, then that’s okay too. But I was prepared for anything and ready to do whatever I could to try and help the team.

“And for me to be out there today and win it in a decider with Stormy was an incredible feeling.”