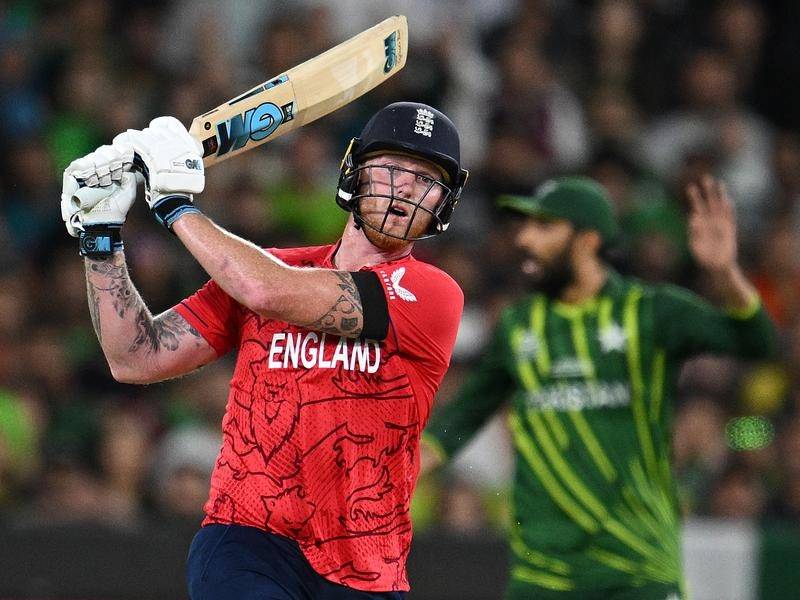 England have stamped themselves cricket’s white-ball kings after withstanding Pakistan’s fearsome pace attack to win the T20 World Cup final by five wickets at the MCG.

Stokes hit the winning run to finish unbeaten on 52 and ensure England claimed their second T20 World Cup title and first since 2010.

They are the first team to hold the ODI and T20 World Cups at the same time after their memorable win over New Zealand in the 2019 50-over final at Lord’s.

Predicted rain failed to arrive and interrupt Sunday night’s blockbuster decider as 80,462 fans turned out for a rematch of the 1992 ODI World Cup final at the same venue.

England were in the box-seat after captain Jos Buttler won the toss and elected to field first, restricting Pakistan to just 8-137.

An explosive spell from tearaway quick Haris Rauf threatened to put Pakistan back in the contest as he dismissed No.3 Phil Salt and Buttler (26) in quick succession during England’s chase to have the MCG rocking.

Shaheen Afridi took a superb catch to dismiss Harry Brook (20) and have England reeling at 4-84 but the star Pakistani quick hurt himself in the process and was unable to bowl his crucial remaining two overs.

Momentum swung back towards England when Afridi went off the field, as Stokes played the starring role just like he did in the ODI final three years ago.

Moeen Ali (19) played a vital cameo role with Stokes but was bowled within five runs of victory.

“I think in finals, especially chasing, if you do all the hard work before with the ball … that’s what won us the game,” Stokes told the host broadcaster.

“That was a tricky wicket, one that you felt like you were never really in on. There was a bit of bounce.

“To restrict them to 137, the bowlers have to take a lot of credit for that

“Representing your country in world cups is amazing. This has been a good one.”

Earlier, left-arm seamer Sam Curran put in a crucial spell of 3-12 from his four overs, an effort which led to him being named player of the match and the tournament.

The miserly Curran was able to remove the composed Shan Masood, forcing the middle-order batter into a rash shot when caught on the boundary for 38.

Legspinner Adil Rashid was equally influential, finishing with 2-22 including the vital wicket of Mohammad Haris with his first ball.

Rashid’s next scalp was even more important, as he dismissed dangerous Pakistan captain Babar Azam (32) during an over that turned out to be a wicket-maiden.

Stokes endured a nervous start with the new ball, sending down a no-ball and a wide with the first two deliveries of the game.

But it was all England after that, silencing the pro-Pakistan crowd by taking regular wickets and limiting their ability to find the boundary.

England and Pakistan both took unchanged teams into the decider after peaking at the right end of the tournament.

Despite a forecast of heavy showers and possible storms, rain did not disrupt the match.