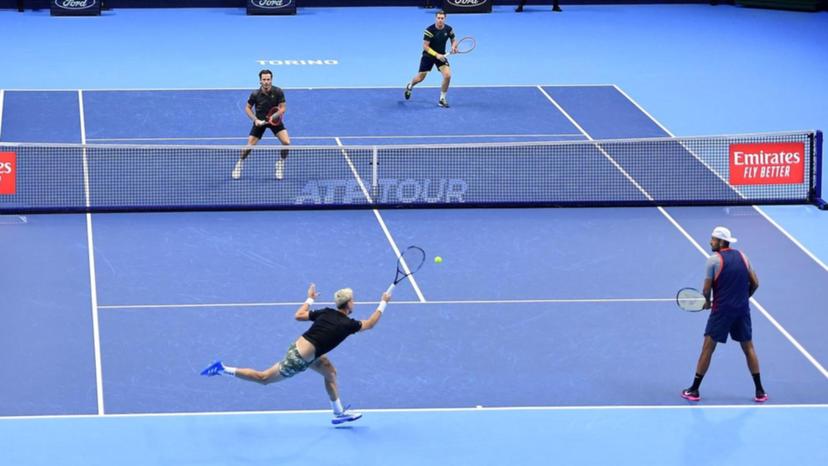 After a battling performance Australian Open Doubles champions Nick Kyrgios and Thanasi Kokkinakis have narrowly lost their opening match in the ATP Finals to world No.1 pair Neal Skupski and Wesley Koolhof.

The Aussie duo took the first set despite Kyrgios having only stepped off a plane on Sunday having played in Mexico City on Friday, but were ultimately beaten in a ten-point match tie-break 6-7 (3-7) 6-4 (10-5).

The Special Ks pushed the top seeds all the way in Turin on Monday, the Anglo- Dutch pair finally overcoming them after 90 minutes.

Often playing more like two singles players than a doubles pair, reflecting their usual tour priorities, Kyrgios and Kokkinakis rattled their specialist doubles opponents. They trusted their ground strokes from the back of the court rather than volleying from the front, and served powerfully.

Kyrgios won the first set in the tie-break with an unreturned serve. However, at 3-3 in the second set Kokkinakis suffered what would prove the only break of the match, beaten by skilful netplay from Koolhof.

That was part of a 12-point run in which Skupski and Koolhof won 11 points. Though Kyrgios held at 3-5 Skupski served out the set forcing a match tiebreak.

The world No.1s had previously won 15 of 20 of these and their experience showed, the match ending when Kyrgios returned a serve into the net.

While Kyrgios only arrived in Italy on Sunday he was accompanied by father Giorgos and girlfriend Costeen Hatzi and his desire to win was clear.

This was only he and Kokkinakis’ 30th doubles match of the year while their opponents had played more than 70.

Pundit Greg Rusedski, the former US Open finalist, said, ‘Don’t rule out these guys. They pushed the best team in the world the full distance.”

Commentator Daniela Hantuchova, who won all four mixed doubles slams, added: “They played some incredible tennis and have so many positives to take into the rest of the tournament.”

Were they to come through to take the title the Special Ks would be the first all-Australian partnership to win the ATP Finals since 1996 when the ‘Woodies’ – Mark Woodforde and Todd Woodbridge – won the second of their titles.

The other pairs in the group in the eight-team competition are Nikola Metic/Mate Pavic and Ivan Dodig/Austin Krajicek, with the top two going through to the semi-finals.

Thanasi Kokkinakis (hitting) and Nick Kyrgios have lost to the world No.1 team at the ATP finals. (EPA PHOTO)