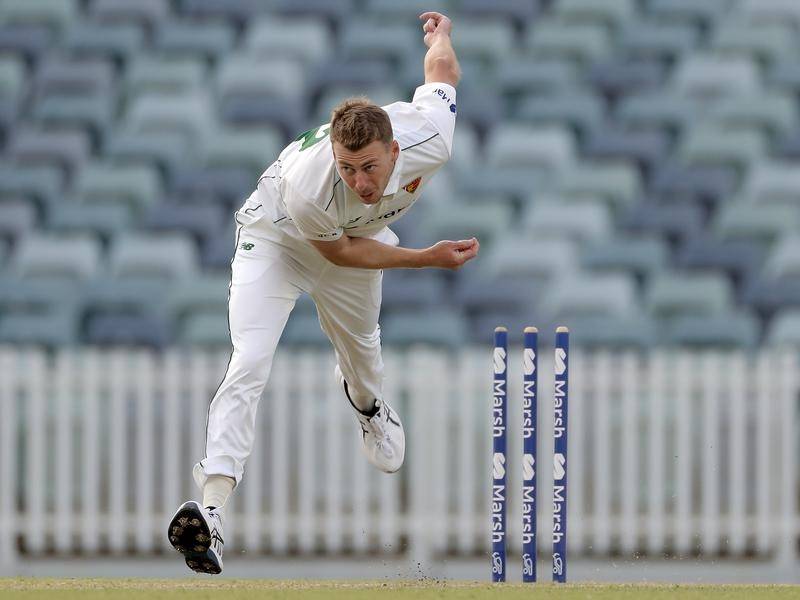 NSW are on the verge of their worst start to a Sheffield Shield season in 11 years after Riley Meredith’s wickets and an all-out assault from Tim Ward put Tasmania in control in Hobart.

The Tigers went to stumps on day three at 2-176 from 24 overs in their second innings and with a lead of 293, with Ward leading the charge with an unbeaten 90 from 71 balls.

It came after NSW declared 117 runs behind on their first innings in a desperate pursuit of victory that is now looking nigh impossible.

It means that NSW will need a miracle on Tuesday to avoid going winless through their first four rounds of a season for the first time since 2011-12.

On a dominant day for Tasmania, Meredith (4-65) claimed four wickets in his first four overs of the day to leave the Blues reeling at 5-74 in reply to Tasmania’s first-innings 333.

The paceman had Kurtis Patterson (0), Moises Henriques (14) and Matthew Gilkes (0) all out edging before lunch, while Blake Nikitaras (32) found fine leg trying to hook the right-armer.

He was unlucky not to claim five scalps when a ball bounced off Baxter Holt’s body and hit the stumps but the bails remained in place just before tea.

Jason Sangha and Sean Abbott offered the only real fightback for the Blues, both scoring 53 as they put on an 86-run partnership for the sixth wicket.

But when they both fell NSW made the call to forego a shot at any meaningful first-innings bonus points and chase the six points on offer for an unlikely win by declaring after tea.

It did not pay off.

The left-hander hit five fours through the offside in one Ben Dwarshuis over, while 15 came in another off Sean Abbott as part of an opening stand of 84 from 57 balls with Caleb Jewell.

Jewell also hit 34 off 25 and when he was bowled by Jason Sangha Matthew Wade took over with 41 off 34.

It helped the Tigers set up for a possible early declaration with a big lead on Tuesday, with a real chance of their second win of the season.