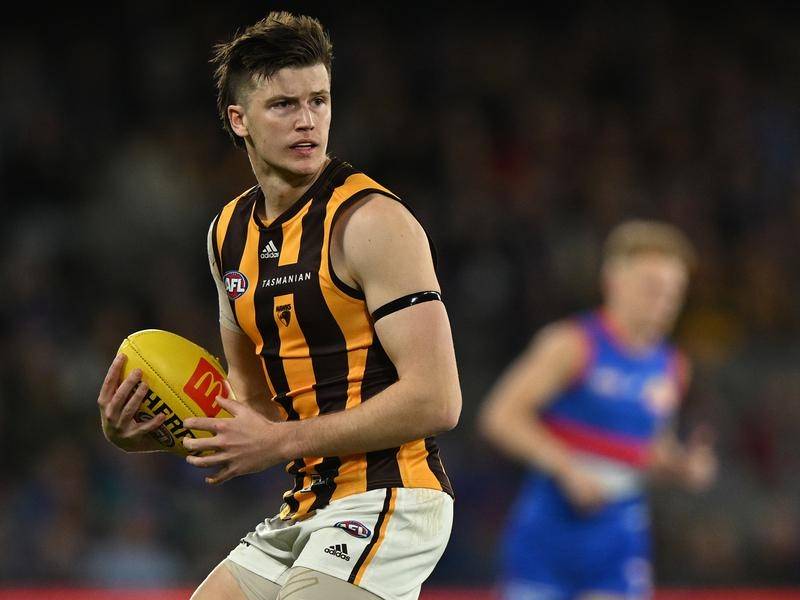 Hawthorn players are bullish about their AFL future after dramatic post-season changes to the list.

Any doubts about their direction were eliminated in the trade period, when Tom Mitchell departed for Collingwood and Jaeger O’Meara moved to Fremantle.

Coupled with Jack Gunston’s late-career trade to Brisbane, plus the retirements of Ben McEvoy and Liam Shiels, the Hawks are in a full-blown rebuild.

But Mitch Lewis and Changkuoth Jiath said it had been clear in Sam Mitchell’s first year as coach that the Hawks were concentrating on their younger players.

“It’s maybe a surprise to some, but we knew this year we’ve invested in our youth and we have a really clear vision for the footy club,” Lewis said.

“We have to – not bottom out – but invest in the youth and build our way back up.

“In three years’ time, we’ll be contesting for silverware – but that doesn’t mean we won’t be trying next year.”

Jiath said a key feature of this season had been working out who would become their next leaders.

“Our focus this year was to find the leadership – guys stepping up and playing their role,” he said.

“If we continue to do that, guys will buy in and more kids will step up.”

Lewis and Jiath were at Thursday’s announcement of a construction agreement for the new Hawthorn headquarters at Dingley Village, which is scheduled to be ready by mid-2024.

Lewis said he and many players lived nearby and are looking forward to the move from Waverley.

“It’s what dreams are made of, so to have probably the most elite facility in 18 months’ time, it’s going to be a great place to be,” he said.

The Kennedy Centre will also have full AFLW facilities, which midfielder Kaitlyn Ashmore said would be welcome after the team’s nomadic debut season.

The Hawks had to train and play at a number of venues, winning three of their 10 games.

“We didn’t really know how our season was going to go,” Ashmore said.

“To win three in a row was really exciting and it gave us a bit of a boost.

“We’re only going to be better and the build in 18 months’ time is going to set us up.”