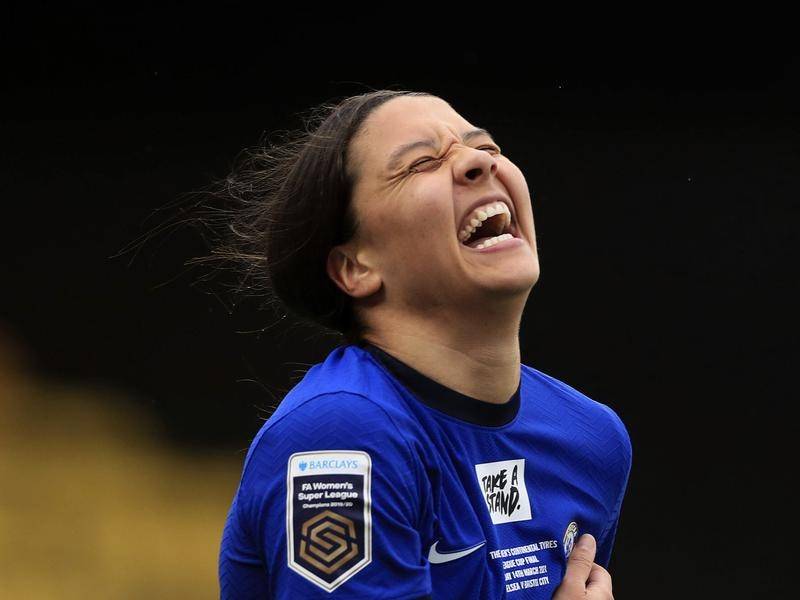 Matildas’ skipper Sam Kerr showed her goalpoaching abilities once again as she laid the platform for Chelsea to go top of the Women’s Super League for the first time this season.

Kerr broke the deadlock as the defending champions beat Tottenham Hotspur 3-0 at Stamford Bridge on Sunday.

With the Arsenal side of Aussie teammates Caitlin Foord and Steph Catley dropping points for the first time this campaign on Saturday, when they lost 3-2 at home to Manchester United, the path was clear for Chelsea to take the summit.

But Spurs have been a solid side this season and there was the prospect of a large expectant crowd growing frustrated, and transmitting that to the pitch, if they kept Chelsea at bay for long.

Kerr, chasing a third successive WSL Golden Boot, ended any concern about that after 12 minutes with her fourth league goal of the season.

She seized on a clearance by England’s Millie Bright, rode a tackle by Canadian Olympic gold medallist Shelina Zadorsky, and steered a shot past the keeper and three covering defenders.

With Scotland’s Erin Cuthbert adding a second after 26 minutes and Norway’s Guro Reiten converting a penalty ten minutes later, Chelsea had the points wrapped up before the break.

Chelsea and Kerr now turn their attention to the challenge of Real Madrid in the Champions League on Wednesday.

England’s Rachel Daly scored a hat-trick as Aston Villa beat Reading 3-1 and Liverpool came from 3-1 down to draw 3-3 at Brighton.