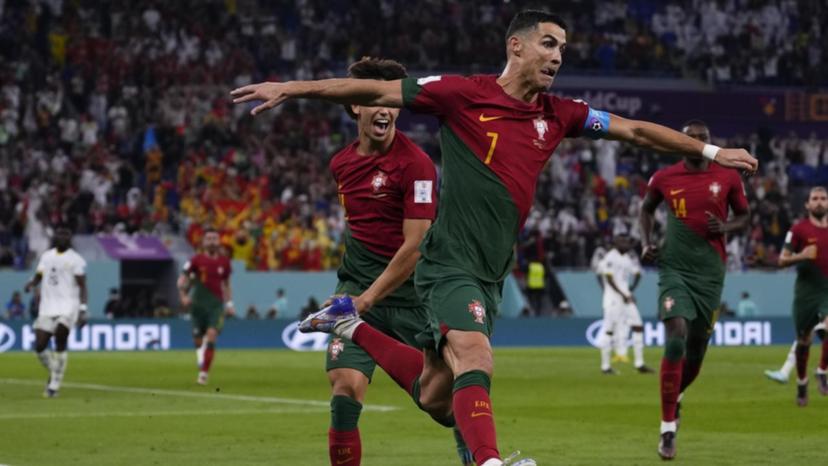 Cristiano Ronaldo became the first man to score in five World Cups after driving home a penalty in Portugal’s 3-2 win against Ghana in their opening Group H game.

All eyes were on 37-year-old Ronaldo on Thursday following his departure from Manchester United this week and never more so than when he stepped up to take a penalty in the 65th minute after being tripped in the box.

Until then he had been tied on scoring at four World Cups alongside Pele, of Brazil, and Germans Uwe Seeler and Miroslav Klose.

Ronaldo has now scored in every World Cup since his first in 2006 and has a record 118 international goals.

“It was a beautiful moment,” Ronaldo said after the match. “My fifth World Cup, we won. That was very important. The world record is something that makes me very proud.”

Ronaldo is now without a club after parting ways with Manchester United but he added: “This week we closed the chapter. The rest doesn’t matter.”

His penalty broke the deadlock after a tight first half, in which Ronaldo had a goal ruled out for a foul, and from then on the goals continued to flow as the error count grew.

Andre Ayew levelled in the 73rd minute from close range – the first goal scored by an African side at Qatar 2022 – after fine work down the left by Mohammad Kudus.

But Portugal re-took the lead four minutes later when a superb pass from Bruno Fernandes split the Ghana defence and Joao Felix cleverly clipped the ball over the goalkeeper.

Ronaldo received a huge ovation when he was replaced but he had barely sat down when Ghana made it 3-2, substitute Osman Bukari taking advantage of some lax marking to head in a deflected cross in the 89th minute.

In the nine minutes of added time that followed, Portugal goalkeeper Diogo Costa failed to spot Ghana striker Inaki Williams standing behind him when he released the ball inside the box.

Williams raced past the startled keeper and reached the ball first, but he slipped at the crucial moment and Danilo Pereira eventually cleared the ball off the line.

So Portugal survived to move top of Group H, winning their opening World Cup match for the first time since 2006.

Ghana have the youngest squad in Qatar and their defence folded as Portugal scored three times in 16 minutes. But their coach, Otto Addo, strongly criticised the award of Portugal’s penalty.

Addo said his defender Mohammed Salisu had touched the ball before Ronaldo. “We play the ball and then there is contact. I don’t know what they did, if the video referee was asleep,” he said.

“The fact that they don’t even look at this scene is madness. It was a wrong decision.”

“If the video referee thought there was something wrong, he would have intervened. He didn’t. So I guess there was nothing to see,” he said.