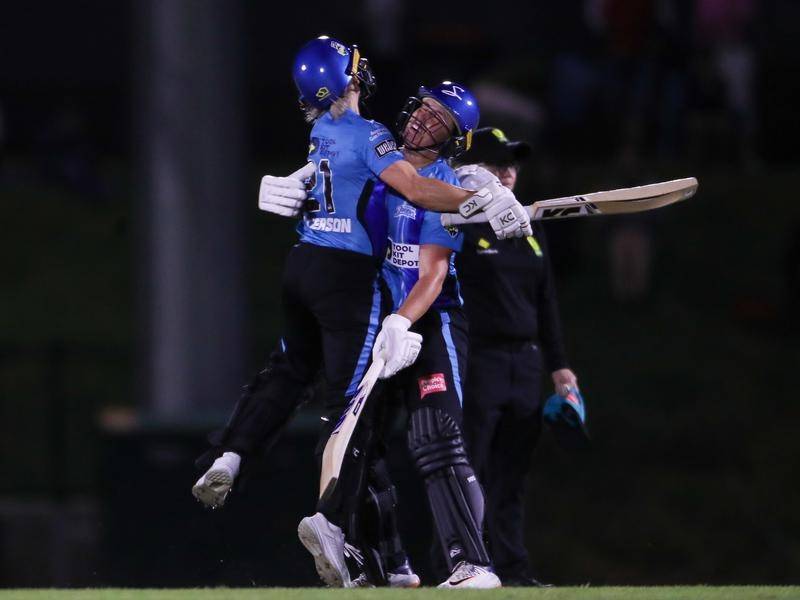 The Adelaide Strikers have won their way through to the WBBL grand final after downing the butter-finger Brisbane Heat by six wickets in an injury and drama- filled Challenger clash.

In reply to Brisbane’s 8-154 in Adelaide on Thursday night, the Strikers won with two balls to spare after a heroic knock from Bridget Patterson (45no off 26 balls) and ice-cool composure from Madeline Penna (11no off 10 balls).

The result thrusts the Strikers into Saturday night’s grand final against the ladder-topping Sydney Sixers in Sydney.

The Strikers lost last season’s decider to the Perth Scorchers, and they’ll be aiming to go one better this time around.

Brisbane only had themselves to blame for the loss, dropping three catches in the field and missing a stock-standard stumping chance.

Courtney Sippel dropped Laura Wolvaardt (47 off 45 balls) in the deep twice – when the batter was on 17 and 21.

Reserve wicketkeeper Ellie Johnston fumbled a stumping chance when Wolvaardt was on 45.

Patterson was on just 17 when she was grassed by Amelia Kerr.

The sloppy fielding came amidst a bizarre cricket injury, with star Heat wicketkeeper Georgia Redmayne appearing to damage either her calf or Achilles tendon while celebrating a wicket.

After taking a catch to remove the dangerous Deandra Dottin for 39, Redmayne took off to celebrate with her teammates but immediately crumpled to the turf.

A confused Redmayne looked at the turf to see what had hit her – only to realise that the pain had been caused by either her Achilles or calf tearing, before limping off.

The Strikers needed 27 off the last 13 balls, and Patterson produced a series of clutch shots to get the equation down to nine off the last over.

Penna then struck Kerr for two boundaries to seal the win.

Earlier, Laura Harris produced another big-hitting display to lift the Heat to a competitive total.

Harris cracked 44 off 14 balls in Wednesday night’s elimination final win over the Hobart Hurricanes, and she followed it up with 33 off 14 balls against the Strikers.

Kerr top-scored for the Heat with 43 off 32 balls, with Grace Harris chipping in with 23.

Heat captain Jess Jonassen (4) was one of those victims, and she wasn’t happy after being caught by Megan Schutt.

Schutt lit the fuse earlier in the week when she described the Heat as an arrogant team.

But what incensed Jonassen was the fact that Schutt and a teammate had come together to talk – not realising Dottin was already running in to bowl.

Schutt moved back to her fielding position just moments before the delivery was unleashed, and Jonassen hit it right to her.

Jonassen pointed angrily and mouthed off as she trudged off the field following her dismissal.

Schutt was also damaging with the ball, finishing with 3-26.