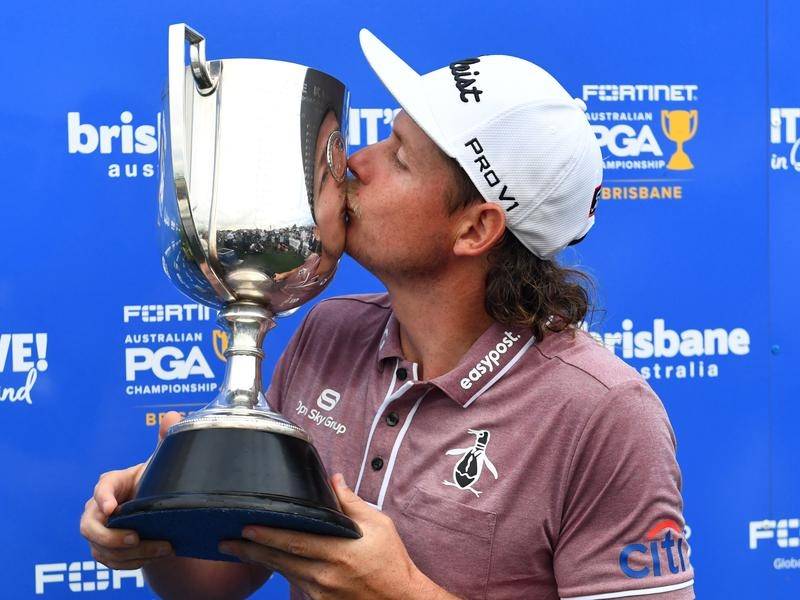 An exhausted Cameron Smith has fought back tears as he credited his grandmother for fuelling the final push to a third Australian PGA Championship and cap a magnificent homecoming.

The Brisbane favourite captured a fifth title for 2022 in fading light on Sunday at Royal Queensland, rallying after twice being forced off the course due to lightning strikes to win by three shots.

Playing in Australia for the first time in three years, the world No.3 had thousands of adoring fans follow his every move over four days.

The Open Championship winner admitted there were doubts he had the energy to add to his 2017 and 2018 titles.

But in his grandmother Carol, who just completed a second round of chemotherapy, walking all 72 holes beside him, he found his inspiration.

“I can’t believe she did it; everyone was telling her to pace herself but she was out there all day, every day,” Smith said, adding that it was also his father Des’s birthday.

“Pretty amazing, inspiring, I don’t know how she did it. When I got back tied (after a bogey on the 11th hole) I really wanted to do it for those two.”

Smith (68, 65, 69, 68) finished 14-under and three ahead of Jason Scrivener and Ryo Hisatsune, while England’s John Parry tied fourth with Min Woo Lee at nine under and David Micheluzzi (eight under) was outright sixth.

It follows his St Andrews triumph, as well as two US PGA Tour wins earlier this year and another in Chicago after defecting to the LIV Tour.

There could yet another, with Smith eyeing a maiden Australian Open title in Melbourne from Thursday.

Smith accepted the keys to the city and a second Greg Norman Medal to begin the week, while also playing a round of golf with namesake and NRL idol Cameron Smith.

He finished it in his trademark maroon shirt as the youngest three-time winner of the Kirkwood Cup.

“It’s been awesome; the reception from everyone has been outstanding and then guys I look up to on the footy field are asking me for a beer or game of golf … it’s pretty cool,” he said.

Scrivener led after two rounds but was seven shots behind Smith late on Saturday before rallying.

A Smith bogey when they resumed play for the final time brought him back level with Scrivener and the Japanese talent, forcing him deep into his bag of tricks.

First he flopped a wedge from scratchy rough, over a tree and onto the 12th green to make birdie.

He then nailed a six-metre birdie putt on the 13th and sealed the result with another on the 16th to add to his 2017 and 2018 titles, both won at the Gold Coast’s Royal Pines.

Scrivener birdied the 15th to get back within a shot, but knew hopes of a first title since 2017 were over when he watched his putt on the 17th roll off the green and into the back corner of a raked bunker.