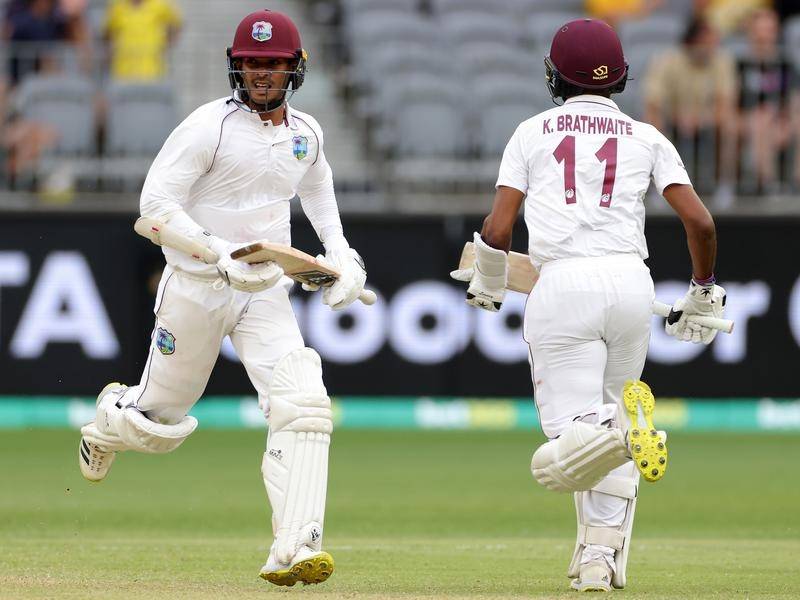 Smith (200 not out) and Marnus Labushagne (204) posted double-centuries and Travis Head made 99 before Australia declared at a mammoth 4-598.

In reply, West Indies made it to stumps on day two at 0-74, with debutant Tagenarine Chanderpaul (47no) and captain Kraigg Brathwaite unbeaten on 18.

There were great hopes the green-tinged Optus Stadium deck would offer significant pace and bounce to the bowlers from the outset.

So far, the pitch has produced few demons, but Smith is optimistic it will get more difficult to bat on during the remaining three days.

“I think the game is set up really nicely,” Smith said.

“They played pretty well tonight, the West Indies batters. Tomorrow it’s important we put a bit of pressure on early, stick to the basics, be really patient, and hopefully that will get us some good results.

“I certainly think a result is on the cards. And I think the cracks will probably come into play a little bit more as the game goes on.

“There’s a few starting to form. They’re not large at present, but there’s a little bit there.”

“I thought the pitch was a decent pitch,” Brathwaite said.

“It has something in it for the pacers. But there’s runs there as well. Australia are going to come hard. They’re a quality bowling unit, so we’ve got to fight.

“Tomorrow is very important for us.”

Chanderpaul, the son of West Indies legend Shivnarine Chanderpaul, has the chance to make a half-century or even a ton on debut.

The 26-year-old copped a series of blows to the body on Thursday, the most nasty of which was a hit to the groin off paceman Josh Hazlewood.

Chanderpaul, who was eight at the time, needed more than three minutes of treatment before being able to resume.

He ended the day with six boundaries and a six to his name in a fighting effort that would have made his father proud.

West Indies will resume on day three of the first Test against Australia in Perth at 0-74. (Richard Wainwright/AAP PHOTOS)