Lyon closes in on 450 Test-wicket landmark 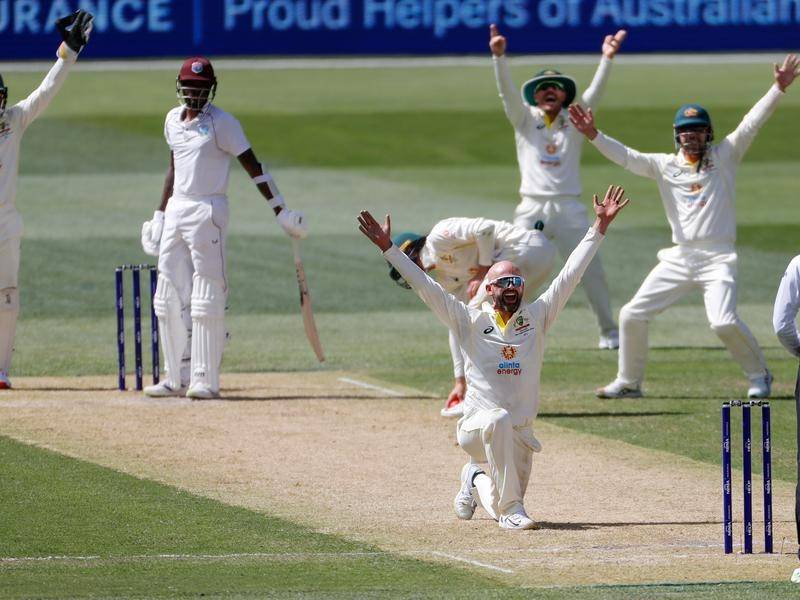 Nathan Lyon is eying off more history with the offspinner on the precipice of becoming just the eighth bowler in Test history to take 450 wickets.

A day after eclipsing Shane Warne’s towering figure of a record 66 wickets at Adelaide Oval, Lyon added two more to his tally against West Indies on Saturday.

More would be expected to come on Sunday, with West Indies on 4-38 in pursuit of the most unlikely 497 to win.

Lyon’s first wicket will take him to 450, a height previously scaled by just seven men in Test cricket, and only by Shane Warne and Glenn McGrath for Australia.

Further scalps will also extend his lead over Ravichandran Ashwin for the second most by an offspinner behind Muttiah Muralitharan and his record mark of 800.

“Many people have talked about it but I think he has the best stock ball I’ve seen in spin bowling,” Australia’s spin coach and New Zealand great Daniel Vettori said of Lyon.

“That ability to repeat it, to ask so many questions, to have the pace on the ball, the top spin that allows the drift and the spin and now he’s trying to add to that repertoire.

“I think you saw a couple of balls, a side spinner where he’s been able to mask that as well.

“I think it just comes down to the fact that the ball that the ball he bowls, his stock ball is so consistent, so repetitive, and asks so many questions.”

Vettori has worked with Lyon for parts of this year, at a time when the spinner has returned to his previous best.

The spinner has claimed crucial five-wicket hauls in both Pakistan and at Perth to spin Australia to day-five wins, while also claiming another five-wicket haul in Galle.

It has given him every chance to finish the year as the leading Test wicket- taker for 2022. He’s two behind Stuart Broad’s 40 and equal with Jack Leach on 38 with an extra game in hand.

South Africa quick Kagiso Rabada is the other main challenger on 37, with South Africa and Australia to play two Tests in Brisbane and Melbourne before the year is out.

“For myself as a spin bowler, I would have loved to have had that (stock) ball,” Vettori said.

“You hear other spinners around the world talk about it and say that’s the ball they admire the most.

“They try and replicate it, try and repeat it but he’s been the only one that’s been able to do it for such a long period of time.”

Nathan Lyon, here in full appeal mode at Adelaide, is on the brink of a 450th Test wicket. (Matt Turner/AAP PHOTOS)